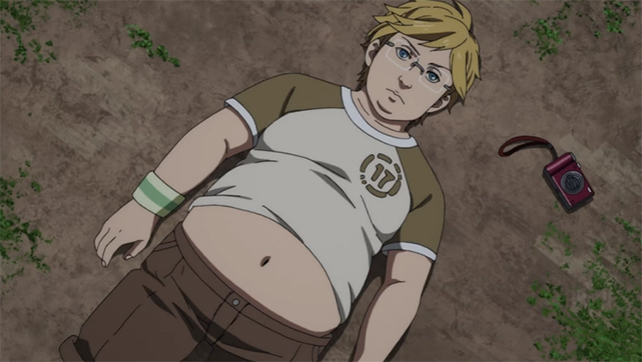 Normally, this is the sort of content I am here for. As you may remember, some excellent friends and I did a panel on male sexualization in games and some of the problems surrounding it at Indiecade East. So an article about which dudes in an upcoming ultra-franchise triple-A game are the hottest: right up my alley.

It kinda all went wrong, and in its wrongness, sent me down a very angry path.

I dunno, which of the three interchangable anime twinks bores you the least?

I’ve written before about FF15‘s all-male cast and how it might have potential, but it also makes me very uneasy… and also how the way games writers have talked about it has made me uneasy. But what bothered me about the article, about 1/3 of the way down or so, was this passage:

I read this and I literally recoiled from my monitor. Like, bodily so.

The “endearing backstory” that Frank is referring to is the second episode of the tie-in anime Final Fantasy 15: Brotherhood, “Dogged Runner,” which explains how Prompto and main character Noctis became friends.

When the episode came out I watched it, and I wanted to write about it, breaking the episode down, but I couldn’t. I managed to tweet about it some, tweets that I am not strongly invested in digging up, but whenever I sat down to actually write something longform I just got too upset. I guess now I’m properly motivated.

“Dogged Runner” is about Prompto as a teenager (I believe middle school). As a kid, Prompto is pretty chubby, though he seems to be in an okay place. On his way home from school he finds an injured puppy, which he nurses back to health. The puppy, bandaged with a scarf bearing Prompto’s name, runs back home in the middle of the night, causing its real owner — one of FF15‘s leads, Lunafreya — to try and find him.

Lunafreya sends Prompto a letter thanking him, and (mistakenly) believes him to be friends with Noctis already, because they go to the same school. She’s concerned about Noctis not having any friends, and asks Prompto to continue to be a good friend to him. Surprised, Prompto thinks this means she wants him to introduce himself to Noctis, which he tries the very next day. And that scene plays out… well, like this:

What follows for the rest of the episode is Prompto deciding that Noctis didn’t want to be his friend because he’s fat. Determined to become friends with the prince, Prompto engages in the mother of all weight loss training montages (it ends when Prompto moves on to high school, suggesting that this might cover years) in which his body type is entirely transformed and he introduces himself to Noctis anew and this is how they became friends, isn’t that heartwarming? The end.

Where do I even start with this.

Criticizing fictional weight loss narratives can be a challenge, because it is not useful or helpful to critique the act of losing weight, or the desire to lose weight, on their own. There’s nothing wrong with that. The important thing, though, is that they need to be part of a narrative where someone is seeking to be happy in their body, and this is very rarely the case.

Take Prompto. The entire affair with Noctis is a misunderstanding; hell, the show includes a bit or two with Noctis himself that drives this home. But then years go by with nobody saying anything. Years! And imagine how much more satisfying a story it would be if at some point it became obvious that Prompto was fine as he was! Imagine if the story was about Prompto grappling with how hard it is to be a fat kid, how his self-hate made him think someone couldn’t like him because he was heavy, and then moving past that. But it didn’t.

Instead what we see is Prompto adjusting his eating habits, taking exercise, and then miraculously becoming what feels like an entirely different physical self.

The Prompto we see at the end of the flashback is confident and playful, and I think it isn’t that difficult to look at this story and feel like it is in a good place. He doesn’t crash diet, right? Prompto wants to lose weight so he eats better, he exercises, he gets thinner. What’s the problem?

But there’s a thousand little things here. The idea that Prompto can change his entire body shape like this. The fact that the misunderstanding that causes this — the social and emotional dimensions of this — aren’t even addressed. Prompto’s weight loss goal isn’t “a body I’m happy with,” it’s “a body I think is thin enough to be friends with Noctis,” a goal that is 1.) incredibly fucked and 2.) never questioned because at the end of the show, he becomes friends with Noctis because he got thin enough!

The problem with fictional weight loss narratives is that the goal is never sustainable, or emotionally reasonable. The goal always seem to be “lose as much weight as possible and completely transform your body type and silhouette.” Which… the world doesn’t work that way! Bodies don’t work that way! So if you’re going to couch your fictional stuff in an aesthetic of realism (as Brotherhood does), maybe that needs to be part of it.

This was a long-winded way for me to say that I find Allegra Frank’s comments about Prompto and his backstory to be really upsetting, rather than “endearing.”

I just… can we carefully consider the optics involved in “It was so heartwarming how this fat kid lost all that weight, and now he’s smoking hot!” for a moment, please? I mean, really think about that message.

This is on top of other problems I have with the piece that are less focused on fatphobia. For example, once the four main characters have been evaluated (notice how the #1 spot goes to the muscle dad? I for one am shocked), the article transitions smoothly to treating the idea that dudes can be hot as a joke, which considering it was ostensibly written by people who are attracted to men, is pretty disappointing. “Which of these FF15 boys is hottest? Also I’d fuck a giant bird I guess.” I dunno. Are you being serious or is this whole thing a joke? Please tell me.

All of this got on my nerves and I tweeted about it, because Twitter is where I vent my spleen emotionally, and then I kinda let it go. The more I thought about it today, though, the more that feeling started to return, and grow, and twist.

I sat and thought, really thought, about what was bugging me about this situation. It’s obvious that Frank and de Rochefort were not acting maliciously. Like most microaggressive things about being fat in the US right now, it came instead from not thinking it through all the way. It’s something that news sites — gaming or not — do on a regular basis. So why would this be gnawing at me so much?

And when I realized it, I made a few tweets:

To save you some clicks on those images: I googled the word “fat” and limited my search to a few sites. Specifically, I looked at: Polygon, Kotaku, IGN, Gamespot, Giant Bomb, Rock Paper Shotgun, and Gamasutra.

What I mostly found was nothing. And I screencapped the first page of results or so, but I skimmed through the first few pages of each search. Nothing. Or, well, next to nothing. Polygon did briefly cover my GDC 2015 talk about fat characters (though hey, get a load of that URL slug… whuf).

Now, this is the most amateur, armchair data collection method imaginable and is not meant to be definitive, but it is illustrative. If these sites are covering issues of fatphobia — like oh, say, Roadhog in Overwatch — then their SEO is pretty fucking bad, because the word “fat” rarely appears in the headline.

I thought about Prompto, and the post about him I wanted to write and didn’t, and how angry I was that nobody else seemed to notice or care about that story, with the exception of a handful of folks in my Twitter mentions fav’ing stuff. Kotaku covered it, but Brian Ashcraft’s story on the Brotherhood ep falls into the the same discursive traps I discussed above.

Earlier today, around the time of the tweets I just linked with the search images, I really let it all out on Twitter. And as I said in that tweet chain, I realized that I was subtly telling myself not to do this. That I was being unfair to the publications, oversensitive to the issue. I was making excuses for the things others did (or didn’t do), instead of allowing myself to be properly upset about it. Spoiler alert: this is a skill that, as a fat kid, you learn pretty fast as a survival tactic. How’s that for irony.

The thoughts in my head about this issue genuinely upset me. I can hear myself thinking “well, we’re good at talking about sexism, or queerphobia, or racism, but not about fatphobia” and that’s a dangerous road. Beyond just being a setup for the useless, intersectionality-denying, rusty-nails-on-the-track footrace that is Oppression Olympics, it also tricks you into thinking we are good at calling out those things, and we are not. I imagine strong critics of ableism probably share these thoughts, because the ways fatphobia and ableism are deployed rhetorically, right now, are very very similar. They focus on the marginalized identity as a moral condition, as something that can be not just overcome, but negated, by willpower and determination, a point of view that is often painfully out of touch with anyone’s lived experiences.

1700 words into this entire thing and I find myself going: what is it I want? What’s my call to action, as people are fond of saying. I think it’s this.  Dear games journalism: y’all need to step up (or maybe, step farther up). That’s all. The journey to recognizing the ways we can be better — the things we can do better — is eternal.

Are we “good” at covering misogyny, racism, and homophobia in games culture right now? Not sure. We’re definitely better at it than we were even 5 years ago, with some exceptions (looking at you, Destructoid and The Escapist), and some publications more than others. There is a non-trivial correlation between games pubs with women, POC, and queers on their writing and editorial staffs and these issues being covered with more nuance. Count on it.

But you can’t stop there. Now you gotta start thinking about this other stuff, too. I don’t want to sound like a jerk, but of the incredibly small number of mainstream gaming publication stories I found about dealing with fatphobic shit in games, all of them were references to my work. My GDC talk, a game I have on Itch.io about fat bodies and gay sex that is up on the (now sadly shuttered) GayGamer.

I am not the only person talking about this domain, not by a long shot. But mainstream games journalism isn’t talking about it at all. It felt very weird to search Polygon stories for the word “fat” and see a link to the story about my GDC talk surrounded by neutral-seeming stories about Fat Princess. Hell, Colin Campbell’s story about my GDC talk — which criticized Fat Princess — has a picture of her as the header image. Come on, y’all! Think this through!

But the fact that stories about the issues surrounding characters like Roadhog, or Ellie from Borderlands 2, or Prompto, are only happening outside the mainstream games press? That’s a fucking problem. And it needs fixing.