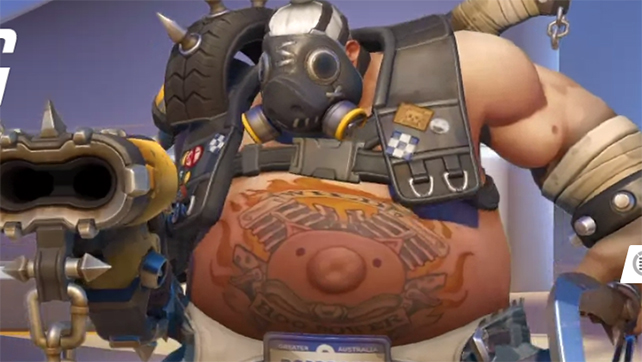 This is a short post. But I am cranky.

Like many people in the gaming culture/press/business/what-have-you, I have spent many a moment over the past couple days looking at my Battle.net client longingly, hoping I too will suddenly receive a beta invite for Blizzard’s upcoming TF2-alike, Overwatch.

To kill some time, I decided to look through their bios for the various playable characters. While many of them are colorful and cool and fun, I definitely get a Street Fighter-y Cavalcade of Ethnic Stereotypes vibe from the cast, which… isn’t that great.

And then I came upon Roadhog.

The weird stereotype parade had me already a little on edge, and then this happened and I got kind of upset, because Roadhog basically breaks a ton of the suggestions I might have offered in, say, my GDC talk from this year. It was seriously just a checklist of Shit I Don’t Want To See Fat Characters Do Anymore. (For an example of a similarly lazy, irritating approach, see my rant about changes to Birdie in Street Fighter V).

So because it’s a thing I do, I’m gonna run through the aspects of Roadhog’s design that really get under my skin. Before I do though, I want to say one thing:

I am not, nor would I ever want to be, the “authority” on how fat bodies should be presented. I am one voice. I believe in my views, but other folks with stake in the issue can and will have different opinions. You should consider their outlooks, too. Just putting that out there.

Okay. That disclaimer being laid, here’s a video that lays out Roadhog’s abilities:

1.) Really tired of fat characters where their primary costume/outfit focus is on not just exposing but emphasizing their belly with ill-fitting clothes. Roadhog represents Australia, in game, so they’re clearly going for a Mad Max post-apoc sort of look for him (read his backstory, it’s a pretty blatant ref). Fine, hence the gas mask and the license plate belt buckle and whatever. But why this harness-looking thing that just serves to scream “HEY HE’S FAT LOOK AT THAT BELLY AND HOW FAT HE IS,” design-wise? Never mind the really weird belly tattoo of an actual pig face with his outsized outie belly button as the pig snout. What is that even about?

Remember that in games like this, a lot of storytelling comes from quick, visual hits (see also fighting games). Characters need to look distinctive. But this design is almost entirely focused around his fatness in a way that doesn’t seem to do anything useful or interesting with it, other than to use it to make him seem abjectionable. It emphasizes that his body is strange/weird, not normal, especially in combination with the gas mask. It’s visual shorthand for “being gross.” I could do without it.

2.) I get you wanted a motorcycle/”hog” joke, but was the pig motif really the best idea, here? I mean… don’t get me wrong. I know a couple big boys out there who are super into boars and boar imagery as a matter of reclamation and pride… but that’s very different than “we made a fat guy who rides a motorcycle so let’s pull in the pig imagery.” Also: a boar is a scary, powerful, threatening animal that has a really different symbology than a farm pig, which is absolutely what’s being evoked with Roadhog’s belly tattoo/belly button thing. A farm pig is a “cute” animal that also becomes bacon. I somehow don’t find that a very empowering or even interesting rhetorical shorthand.

As an aside: the “meat hook” attack makes a very clear link between Roadhog and Diablo villain The Butcher, which… ngh.

If you flip to the 00:45 second mark in the video, you’ll see Roadhog using one of his abilities, “Take a Breather.” It appears to be a heal that triggers after you make a kill? But for expediency’s sake, I’ve made a gif of how the ability looks in third-person view when it’s used (which you can see for yourself in the video around 00:52) —

3.) Stop giving fat characters abilities that are based on eating. So, to be clear: he is not literally eating food. As far as I can tell he’s inhaling some sort of vapor or aerosol or whatever from a container through his gas mask (hence the pun name “Take a Breather”). I know this. But let’s be real: he’s eating something. Like, I just… it’s the laziest possible sidestep and it’s not even an effective sidestep. I don’t even want to talk about how whatever he’s inhaling makes his belly inflate and the weirdness that represents. For all intents and purposes this is “make a kill, have a snack to restore health.” To be honest even the “whip something out and bring it up to your mouth” motion of the inhaling is enough to set my teeth on edge.

I’m sure a lot of people are calling me “oversensitive” right now, especially after that last point. Well, maybe I am being a little sensitive, I guess.

But here’s the deal: while progress is slow indeed, I have some hope that games will do better at representing gender, sexuality, and race/ethnicity in the future. I think those things are improving, and will continue to improve.

I don’t actually have that hope, though, for fat bodies/characters. It never feels like they’re ever getting any better. I can count the number of fat characters that I like, which manage to avoid at least a decent amount of lazy tropes, on one hand, and even those are complicated at best. For what it’s worth, I feel this way about disability and neuroatypicality, too, and for the same reason:

I think it’s hard for thin people to conceive of better representation of fat bodies as worthwhile (and for the abled to think of representing disability as worthwhile), because it’s often seen as the fat person’s “fault.” There’s less of a moral imperative to believe that improving this sort of representation should even happen. I don’t say this to imply that the moral good of other facets of diverse representation “have it easy…” but like, to be blunt, it’s way easier for me to get people to care about my work when I’m talking gender and sexuality than it is when I’m talking about fat bodies. It feels like the same lazy tropes about fat people will continue, unabated, into perpetuity, because nobody can be convinced to care enough to do anything.

And to be honest, that’s exactly what this Roadhog design is: lazy. There’s no ingenuity, no cleverness, no subtlety, no parody or satire, here; just a fat man whose entire visual schtick is to draw attention to how fat he is as visual shorthand for his body being gross/undesirable, attached to a generally unpleasant and weird character. The “hog” part could be tied to a vision of wild pigs/boars/whatever as powerful and territorial animals; instead we get a Porky Pig-esque cartoon face on his big round belly with a comically too-large outie as the “snout.”

This design feels like somebody got the assignment to “make a big dude” at 9am and was congratulating themselves on their smart work by lunch. I’m not a fan.

I’m still hype to try out this game. I hope it’ll be fun. But Roadhog is just one of a handful of lazy character designs relying on easy visual or rhetorical tropes that put marginalized bodies/identities up for outside consumption disrespectfully. And while I get why games like Overwatch or fighting games rely on quick, easily-identifiable visual markers, I think it is not just possible, but necessary, for us to find ways to make these characters “pop” without dipping into a poisoned trope well.