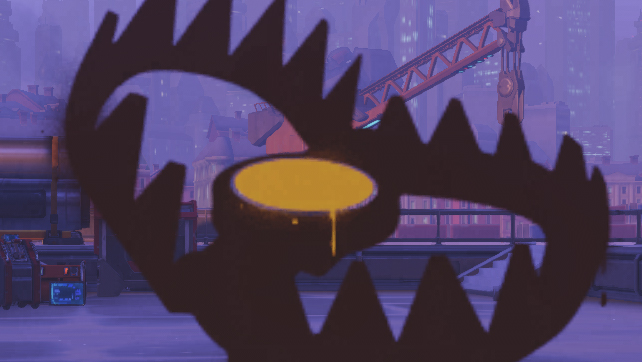 I feel kinda trapped when it comes to Overwatch’s Roadhog.

As I have said about six million times, I find his design really upsetting in the sense that it’s lazy and reflects all the bad tropes of fat character design.

But this week I found an entirely new way to be upset about Roadhog, since I was introduced to this gross as fuck fanart manip that “slims down” Mei. You know, “for her health.” Which then inspired someone to do it to Roadhog, because I guess re-instantiating the joke uncritically is the best form of critique? In that artist’s defense, however, the original post appears to be gone, so maybe they realized that.

Then later on I was introduced to a “sexy Roadhog” which is to say “a thin Roadhog with tity.” When I was skimming DeviantArt (more on that, below) I found the grossest possible iteration of this trope.

It was infuriating being in that position, though. Because I felt like I had two options when it came to Roadhog:

1.) See art that reinforces his trope-y, lazy design and thus directly contributes to the stigmatization of fat bodies.

2.) See art that thins him down, usually in the service of making him “sexy,” reinforcing that fat = abnormal/unsexy by default and thus directly contributing to the stigmatization of fat bodies.

When I wrote that blog post I linked above, ages ago, I felt like in my head, I could tell: “When fanart happens, all the bad shit Blizzard did is just going to be reproduced by fans. He’ll always be a joke.”

Consider this image I saw retweeted into my timeline this morning:

apologies to my modest followers lurking late at night pic.twitter.com/rR8ZDTDQrH

Notice how Mei is off to the side, alone? Notice how Roadhog’s appearance is entirely a joke, from the “fat dude doing a cannonball” bullshit to the “look at his frilly girly swimsuit” bullshit? Even better is that the tweet’s text talks about “objectification” but you’ll notice that the objectified ones are also the ones with hegemonically body normative shapes. “Everyone gets to be sexy! Except Roadhog, he’s a joke.”

However, I did notice one thing. Before I sat down to write this, I went to the DeviantArt tag page for “Roadhog” and looked around. It was a pleasant surprise, to some extent. There was, of course, a lot of relatively “neutral” art which was just Roadhog looking like Roadhog. And of course, there were scattered examples of the Roadhog-as-joke thing and the “Make Roadhog sexy by making him thin and/or a woman” thing.

But there were also a surprising number of images that seemed to give Roadhog some genuine humanity and care. I’m gonna link a few. See if you can find the common thread.

They’re all Roadhog with his husband (shut up you know it’s true) Junkrat.

As much as I dislike Roadhog — and I probably always will — the stuff that I linked above, and the other pics like it… I didn’t find them upsetting. And like, I very easily could have. The “thin one + fat one” pair is a pretty common trope, after all, and Junkrat/Roadhog fit it to a T.

But these images at least treat him like a person. They don’t try to strip away his being fat in the service of some culturally-approved notion of what’s “sexy” or “normal.” I suppose you might look at the nail polish one and ask why I’m okay with that but not frilly bikini cannonball Roadhog, and I would say: because both rely a bit on playing against gender type as the joke, but it’s a “laugh at” vs. “laugh with” situation (and one plays into a tired old joke about fat dudes doing cannonballs in a pool and one is about a dude painting his boyfriend’s nails).

I can tell you among my dudes-into-dudes friends who like big guys, there’s no small amount of Roadhog love. I get that! I try not to get up in anyone’s shit if they’re into his design just because I’m not. That’s unproductive.

It’s important to me, though, that if this trope-y lazily designed character is going to exist, that the fanbase treat him with some humanity. He needs to be a person, insofar as any of Overwatch‘s various comic book caricatures are people.

You’ll notice, too, that it’s fans who are giving him this humanity, this interior life, and this resistance to trope type. It’s fans who have done the work to invest life and depth and emotion into the cardboard standup of Roadhog that Blizzard actually gave us. This is true of almost all of Overwatch‘s various characters, and I think that bears saying. Blizzard gave us pretty, colorful art of these characters in an interesting setting. But they didn’t give us people. Fans made that happen. We did that work. This needs recognizing.

And as long as that work continues, I will continue to ask — indeed, demand — that fanwork of characters like Roadhog not continue to reify the awful vision of him we were handed, but instead to seek to make him an actual person instead of a joke. If he must exist, then keep giving me Junkrat painting his nails rather than “dur hur Roadhog’s fat isn’t it hilarious to point that out?”

If he’s gonna exist, then I would like for him to exist in a way that doesn’t make my life demonstrably worse by playing into society’s already-execrable views on fat bodies.