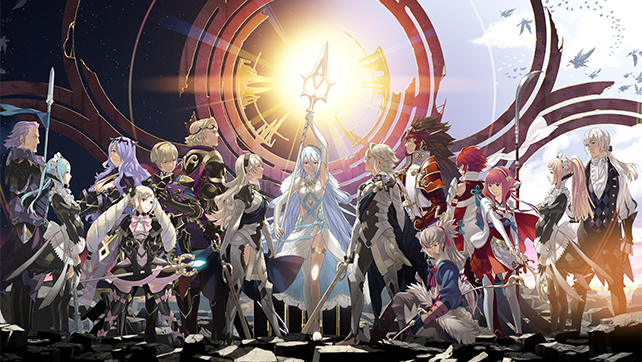 For a long while, while we were waiting for Fire Emblem Fates to get localized after its Japanese release, it was a topic that I felt like I’d do anything to avoid. The Soleil / Kamui support conversation issue felt like a minefield full of barbed wire and angry dogs. You could be gay (well, canonically/mechanically gay; my Fire Emblem headcanons have been gay as shit for a very long time… looking at you, Lyndis) but only one gender per version, a phrase I never thought I would say.

Part of the reason that Fates became such a lightning rod, I think, is that Awakening was way more accessible to a wider range of players with differing interests than the series had ever been before. The result was (happily!) a wider fanbase, but a wider fanbase also means a broader set of expectations, values, and hopes from the players inside it.

I knew I would like the games. I knew that the actual content that was at the center of this utter maelstrom of strong feelings probably wouldn’t end up as problematic as we were imagining or dreading. But emotions were so high that I just eventually avoided discussing it altogether. That said, as of now I’ve spent fifty hours or so with one of the game’s versions, Fire Emblem Fates: Conquest, and another thirty-five or so with the Birthright side, and I’ve been enjoying it for the most part.

Expectedly, though, I’ve also been watching the game’s deployment of queerness pretty carefully, and as I’ve met new characters and explored their support options, I’ve had some surprising insights. Because there’s some (very minor and only for support convos) spoilers here, more after the cut:

After 80+ hours of Fire Emblem, here’s the place I’ve come to: when it comes to mechanical support for queerness, like the linking of same-sex marriage to the Support mechanic, the game falls kinda flat. Similarly, a few of its characters tell some amazingly powerful queer narratives… which then find no resonance whatsoever with actual game mechanics. The result is a very complicated situation.

So, if you don’t know anything about Fire Emblem‘s Support mechanic, it goes like this:

In Awakening these S-supports were one of the game’s most engaging mechanics, since the kids of these S-rank pairs traveled back in time and became actual recruitable, playable units. There were obvious narrative (and shipping) payoffs for engaging this system, since they were the route to most of the game’s character-based story content. However, the kids also inherited stats, skills, and available classes from their parents, meaning that if you were more interested in gameplay than story, Support was still a system you would want to engage with.

In Fates, it’s Conquest that allows you to have a male/male S-rank Support pairing; specifically, you can marry bow-wielding thief Niles (or, as I called him so often I nearly forgot his actual name, “Eyepatch Daddy”). I’d initially planned to be a dude Corrin (the default name of the avatar) and marry him, but in the end I chose not to. Why? Because if I did, two of the child characters — Niles’s daughter Nina and Corrin’s child Kana — would never be born.

Through a tremendous plot contrivance of epic silliness, the kids-as-playable-units mechanic from Awakening returns in Fates… but if your Corrin is gay married, then those kids never happen. To say that this feels like the game is giving with one hand and taking with the other is an understatement. No heterosexual couples have this sort of restriction. It’s basically a price players must pay to have a gay Corrin. That price can vary; for players in Casual mode and no permadeath, it’s lost story and character content. For players on Classic mode, where permadeath may have claimed lives already, losing two entire recruitable characters is a potentially steeper cost.

So instead I played a lady Corrin, as is my usual approach. Eyepatch Daddy married Corrin’s sister Camilla. His interactions with other characters gave no impression he was into dudes; in fact, since the Support menu lets you see a character’s potential S-rank pairs, I knew the only dude he could be into would be a male Corrin. He felt less like a queer character and more like a “gay option” — one with a significant cost! — and frankly, that’s less satisfying to me. I’ve written before about my considerable problems with “playersexuality” and I think everything I say there applies here.

As I kept playing, though, other couples hooked up, bonded, married, and had kids who would in turn join my ever-growing (and increasingly improbable) army. It was in the stories of a few of these kids, however, that the real queer magic started to happen for me.

Corrin’s brother Leo, a serious and studious mage, married his sister’s swordswoman retainer, Selena. The child of this union is Forrest, who may be my favorite character in the entire game at this point.

Each kid unit has a recruitment mission called a Paralogue, and in Forrest’s, brigands are attacking a town near to where Forrest lives. I give a summary below, but if you want to just see things for yourself, here’s a YouTube video of the entire mission:

As the army (Leo included) nears on a planned visit to see Forrest, they hear tell of the attack, but also that a “beautiful woman” is healing the wounded. Before that news comes to light, Leo seems reluctant to make this visit; hearing it makes him suddenly leap into action, to the confusion of everyone.

Of course when the party arrives, they find that the “beautiful woman” is Leo’s son Forrest, a young man whose clothes and long ringlets present femme. The ensuing conversation sees Leo call his son “a disgrace” (which his sister Elise promptly takes him to task for). Upset, Forrest leaves to heal more wounded… and is promptly found by bandits, who capture the “pretty thing” and plan to sell Forrest off for ransom (or worse). A rescue attempt by Leo and company ensues.

After Forrest is saved, however, he and Leo talk. “Don’t think for one moment I’m leaving to spare your feelings,” Forrest says. “You’re unworthy of me, Father.” Leo, gobsmacked, watches as the villagers express their thanks, and then finally admits to Forrest that he has acted like a jerk, asking if he could have a second chance to know his son — “a person of sterling qualities” — better.

I had to set down the 3DS after that and just breathe into my hands a bit. The disapproving parent, the gender nonconformity, the feelings of not being wanted… they hit way too close to home to my own memories, hopes, and fears while growing up gay. I immediately fell in love with Forrest’s self-confident and defiant attitude. He knew himself and had no interest in humoring a father who couldn’t handle it. That story felt really satisfying in a way that, at the time, I wasn’t sure marrying Niles would have.

Perhaps the best part is that Forrest’s support conversations with his father start with Leo immediately expressing his regrets for his bad behavior and wanting to get to know Forrest better. Forrest’s mother constantly reassures him to be who he is no matter what people think. The avatar understands that the world may be cruel sometimes, but Forrest’s friends will always accept him. The initial rejection by Leo starts on a sour note but he very quickly shifts to supporting Forrest in their C-rank support conversation:

See also: Soleil, the daughter of charming womanizer Laslow. Her paralogue finds the party in a similar situation: brigands are attacking a town, and Soleil has leapt into the fray to defend the townspeople. When the dust settles, Laslow praises his daughter for her conduct and skill. Their conversation is interrupted by a cute girl villager stopping to thank Soleil… who promptly, after a moment of being flustered at how cute the girl is, asks her on a date. The villager says yes and they wander off.

One of the other party members, Silas, asks Laslow if his daughter really just asked a girl out on a date. Without missing a beat, Laslow reples: “Why yes! She’s got good taste. In women as well as men — got a problem with that?” It was a great moment, a father who couldn’t be happier about his daughter just the way she is.

Perhaps the best twist is that Eyepatch Daddy’s daughter Nina — you know, the one who wouldn’t be born if her dad gay-marries Corrin? — has one of the best personal skills in the game. Called “Daydream,” it gives Nina a stat buff if she’s near two male units that are paired up as a duo. That’s right: she draws power from gay shipping her dude allies. It’s marvelous.

The problem, though, is that the mechanics of the game only erratically support these really enjoyable narratives. Despite her love of cute girls, Soleil’s only S-rank supports are with dudes, for example. Forrest is limited to male-only equipment/classes and is consistently referred to with male pronouns, but uses the female unit animations/stances (check out this tweet thread for evidence of that).

Similarly, for the characters where queerness is mechanically supported, the narrative is inconsistent. Niles can be “mechanically gay” in having an S-support with a male Corrin, but if you don’t choose to do that, then all the story markers of Niles’s queerness effectively disappear; if you do choose that path, then you’re mechanically punished through the loss of two entire recruitable characters. To restate clearly: Fire Emblem is perfectly okay saying “your kids are now adults the same age as you because they lived in a time-accelerated astral pocket dimension through their childhood but the idea of a same-sex couple having a child together is mechanically ludicrous” which… I think is the height of this disconnect.

Don’t get me wrong, by the way — I went back and watched the S-support conversation between Niles and a male Corrin, and I admit that I really liked it:

The discussion of feeling like you’re too broken, too terrible inside to be loved hit a queer note with me too. But honestly, seeing this just made me even more upset that unless you specifically pair Niles with Corrin, this entire thread of the character’s story never happens.

These gaps and inconsistencies are proof that whatever Fates is trying with bringing queerness to Fire Emblem, it’s only a first step. Much like real life politics, adding gay marriage to Fire Emblem was nice, but it wasn’t exactly The End where everything is Now Fixed.

The tragedy there is that it’s the small stories and interactions that are inside the Support conversation mechanic itself that are Fire Emblem‘s best queer content… in fact, they’re its best story content full stop. I wanted a Niles who would own being gay or bi outside of my choice to romance him or not. I wanted Soleil to be able to mechanically seal the deal with a lady with an S-rank support, and not just talk about it. I wanted the game to really commit on Forrest’s gender expression and let him change into the lady-only Maid class (and probably to use she/her too; I’ve used “he/him” in this blog post because the game consistently uses male pronouns for Forrest).

Of course, now I’m at the same place where I always end up: will people read this and go “Todd thinks Fates is bad! Todd thinks Fates did something wrong!” No. I think it did some things right, and I think there’s room to improve on others. I’m happy that Nintendo offered the options they did and I absolutely don’t want to take away from anyone who gay married Eyepatch Daddy (or his Birthright counterpart, Tharja 2.0).

Maybe we just need to have Gay Option and Queer Storyline spend more time together on the battlefield supporting each other? Then they can get an S-support and be properly married.