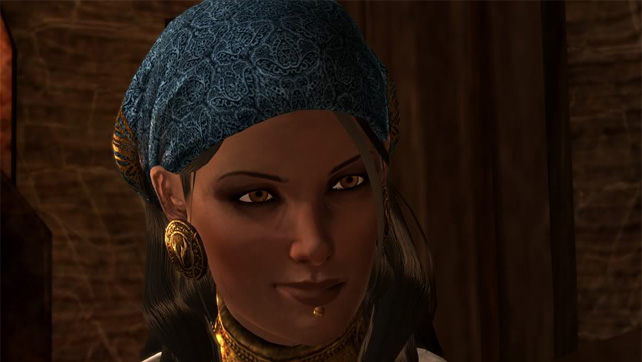 So let me tell you about the time I annoyed David Gaider at a major gaming event.

As many of you know, I spoke at GaymerX2 this July, as did Mr. Gaider who — if you didn’t know — is one of the head writers at Bioware and a major creative force behind the Dragon Age series of games. Bioware presented a number of panels at GX2 this year, including one called “Building a Better Romance” that was about creating and developing in-game romances. Considering that this is often considered Bioware’s oeuvre, and that as a developer they’re known for being the rare AAA entity striving for queer inclusion on this angle, it was a topic of some interest. This was, notoriously, the panel where they announced that Iron Bull, in the upcoming Dragon Age: Inquisition, would be romance-able by either gender.

Anyhow. So when they allowed questions, I decided I wanted to ask this team about the subject of what I was terming “Hawkesexuality:” the idea that the romance options in Dragon Age 2, with the exception of that toolbox Sebastian, were generally speaking always available to your created avatar (whose family name is Hawke), regardless of what gender you chose when creating them. To me, there was a question here about representing the sexuality of characters that I wanted to know their thoughts on.

So up front, let me tell you that many of the issues I’m about to discuss, Denis Farr has also talked about on The Border House back in 2012 — I absolutely recommend reading his piece. I’m going to cover some of that ground too, but in an additional direction.

Their responses are a thing I’ve been meaning to write about for some time and am only now just taking the opportunity to do. For the details, follow after the break.

So Bioware themselves posted an audio recording of the panel, including my question, which is on YouTube. I’ve linked the video below and cued it to my question (the 34:25 mark) but if you have time, I do recommend listening to the entire thing. They had a lot of interesting stuff to say, in general. For the purposes of this post, though, I’m concerned with what I got up to ask.

Gaider’s counterpoint, and his resistance to the commonly-used fan term “Hawkesexuality,” was not exactly off base. The idea that the four non-DLC romance options of DA2 — Merrill, Isabela, Anders, and Fenris — only “acquire” a sexuality once they take an interest in the player is indeed a form of bi erasure. Especially in the case of Isabela, who is perhaps one of the only video game characters I can think of that has an explicit and, more to the point, unashamed/unqualified bisexual identity (one of the only others, Zevran, is also a Dragon Age universe character). I think that’s a pretty reasonable critique: the idea that without an established partner, these characters don’t have a sexuality does sort of reinforce the idea that their sexuality is then defined by the gender of their partner, which is indeed hella weird.

It does make me think, for example, on a very thorny real world issue: assuming opposite-gender pairings are always made up of two heterosexuals. It’s an issue Apple Cider Mage of the Justice Points podcast has discussed with me, before: the challenge of being a queer woman who is in a relationship with a man, and as a result being perceived by strangers as straight. That really is heteronormativity in a nutshell, and it’s a type of heteronormativity that a lot of non-bi/pan queer people — including me — buy into without thinking: the idea that queerness is defined by opposition to a norm.

And of course, that sort of thing creates a long legacy of really harmful behavior/erasure toward/of bi and pan people by other queer individuals. The notorious concept of gays and lesbians resenting bisexuals for a perceived “easier time” passing in the straight world, for example, or the sneering assertion that bisexuals are just being “trendy,” or are secretly gay and lesbian and are too “afraid” to just say so. That sort of thinking does really require that bi people wear their bisexuality on their sleeve, which is ridiculous. Of course as queer people they’re subject to all the prejudices straight people have as well, meaning that they effectively get it coming and going, which is the worst.

However, I do want to talk about this notion of “Hawkesexuality” more closely, though, because I think the argument that was behind my question is also still valid, and it’s one that applies to characters outside of those with a bi identity as well. Let’s go back to Isabela for a moment. Consider her party banter conversations with, say, Hawke’s sister Bethany:

Of course, Bethany is a sort of “cloistered young lady” personality to begin with, but her shock at Isabela’s wide range of sexual partners is very telling, at least as a background detail about the world. Isabela’s banters with Aveline are similar in that regard, with a wide range of slut shaming, though it bears noting that Aveline is not exactly using the same moral compass as most of DA2‘s cast. But the best thing about Isabela is that she actually talks about, has feelings about, and is willing to articulate her sexuality as part of her identity. It’s something really missing from the rest of the cast, and this is why despite Gaider’s argument, I think I will continue to consider the term “Hawkesexual” or “Playersexual” as useful. Not because the potential for a sexuality in those characters only exists relative to the player — Isabela is proof positive of that — but instead their relationship to the player is frequently the only way that sexuality is expressed.

The problem, of course, is that this is fundamentally about the Lady Boss Paradox: sexuality always matters (it’s a formative shaping force on your being) but we frequently want some time where it’s not the most important thing in our life/about us. The Gearbox panel also from this year’s GaymerX2 — as well as one or two of the Bioware panels that followed — addressed the idea that inclusive design needs to not make a queer character (or any other character reflecting an element of, for lack of a better term, “diverse identity”) defined solely by their queerness. It needs to be part of a character’s range of identity.

I think the issue is that this idea of a character “who happens to be queer” rather than a character “defined by their queerness” is:

1.) A bizarre false dichotomy and

2.) An excuse not to ever mention their sexuality.

Consider that for a sec. How do we even mean that a character “isn’t defined by their queerness” in a narrative game, one frequently driven by character dialogue and interaction? Generally speaking, I’d say that this means they have elements of their personality and history that make frequent appearances which… aren’t about their sexuality? I guess? Is that a fair test, though?

I mean, consider this scene from the Anders romance chain in DA2:

How do you separate out which parts of this are “about” Anders’s sexuality and which parts aren’t? What in his history, his views on the Chantry and Mages, all the other stuff… how much of that is bound up with his sexuality and how much isn’t? It’s really impossible to tell. Of course, I wouldn’t say Anders is a character defined by his sexuality. It is clearly part of him, though, and the obvious parallels between Mages in the Dragon Age universe and queer people are pretty apparent.

Yet what if you’re playing a lady Hawke? What sort of a bind does this leave us in? I mean, just above I said that I’m struggling with not immediately sorting “opposite-sex couple” into the “heterosexuality” box merely because they’re opposite sex. So I don’t want to assume he’s straight. But Anders doesn’t ask a lady Hawke, for example, if she cares that he’s “been with men,” a thing he does ask an interested bro!Hawke when they’re starting to flirt/make passes.

The key point here is that Anders doesn’t have to establish his hetero bonafides, because heteronormativity. He never has to articulate that he’s straight. It’s just baked in. So is a character that isn’t “defined by their queerness” one that never actually feels the need to say “I’m [aspect of queer spectrum here]”? That seems like a reasonable measuring rubric, yeah? But consider what I just wrote about Borderlands the Pre-Sequel‘s Janey Springs. She never actually comes out and says she’s a lesbian, either, though she does take the step of saying on a couple occasions that she’s not into guys; this, combined with her attraction to Athena and talk of a former girlfriend, makes “lesbian” a compelling read of her character without being explicit.

Part of me is looking at this, especially in the context of romance options, and going: isn’t finding out if your romantic interest shares enough of your sexuality to be compatible a necessary first step in this process? It is, in many ways, a thing straight people don’t usually need to do, because heteronormativity (seeing a pattern?). But to me, finding out if the person I’m interested in is okay with the affections of a gay man, and would be willing to maybe return them, is pretty key. I’m not going to pursue them, otherwise. Why would I?

I think this idea of moving away from a character who’s only in a game to be “the gay” or “the bisexual” or “the trans person” is good-hearted. I think it comes from a place of wanting to make characters that are compelling and interesting, and to be honest, in real life a person who’s primarily defined by only one aspect of their personality — like, let’s say… “gamer”? — are pretty frequently not that interesting. Multi-dimensionality is key. But multi-dimensionality does not have to mean burying something like a character’s sexuality. That line of thinking is predicated, consciously or not, on the idea that a person’s sexuality can be cleanly separated from their politics, their morals, their likes/dislikes, their mood, even their physical appearance. It can’t.

And in truth, it’s people who don’t fit cleanly into boxes that suffer the most, as the phenomenon of “Hawkesexuality” shows. If a character never talks about their sexuality — even in oblique terms — then players are going to make assumptions, and often those assumptions are going to fall along the lines culture lays out for us. It’s not a surprise that most people don’t think of the Dragon Age 2 cast as not being bi or pan except for Isabela, but it is kind of a shame.