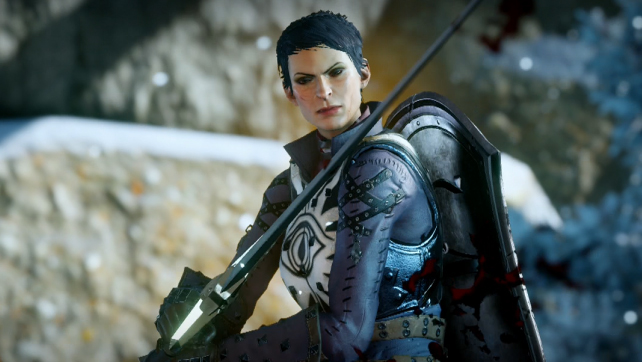 I want to talk about the part of Dragon Age: Inquisition that made me cry, or at the very least to tear up and force myself to not cry.

There are a lot of narrative beats, a lot of moments, in DA:I. I am sure you might expect that this emotionally-impacting scene is one of many in the rather large, global scope of the game’s story. Right?

Nope. It’s about a woman. Specifically this woman:

Probably my biggest, tear-jerking-est emotional moment in Dragon Age: Inquisition came when Cassandra Pentaghast had finally had enough of my flirting and had to tell me, in no uncertain terms, that it wasn’t meant to be.

While this post is mostly spoiler-free, I’m still going to put everything behind the cut just in case.

So, some context. The “romance option” is by now a cornerstone of the Bioware storytelling style. DA:I took a step back from DA2‘s approach (which I’ve written about previously) and went back to romance-able NPCs with specific, defined sexualities. Cassandra is an option for male Inquisitors, but not for women. She IDs as a heterosexual woman.

Something new in DA:I, however, is that your Inquisitor can flirt with characters that you can’t romance. I actually like this a lot, even though it is also the source of two of my greatest heartbreaks: the subject of this post, and that you can flirt with but not romance Scout Lace Harding. But it’s also a source of interesting moments, and a nice beginning to a trajectory away from previous models of Bioware romance where the world revolves around your character. You can flirt with the indomitable Madame de Fer, Vivienne, for example, but her response will always be an amused “Of course not!”

A natural consequence, however, is that there is a possibility of heartbreak. That’s the situation I found myself in: my lady Inquisitor flirted with Cassandra relentlessly, partly because I as a player unexpectedly found her an incredibly compelling character. Cassandra is a devout knight, a Seeker of Truth: a member of an ancient order that are the “watchers of the watchmen.” But as of the events of DA:I, her world is crumbling. The church is floundering, the world is in peril, and if you do her character-specific quest you also discover that the Seekers have a dark past they’ve been keeping from the world.

Cassandra is trying her best to keep up, however. She comes to trust the Inquisitor in ways she didn’t expect. She comes to challenge the tenets of a church she’s served all her life because she believes it can and should do better. Cassandra doesn’t reject any part of her past; she synthesizes them with her current situation into being a genuinely good person. So why wouldn’t my Inquisitor flirt with her? She’s amazing, a pillar of strength, a worthy partner.

And if Cassandra likes you — and you flirt with her enough as a lady Inquisitor — the following scene will eventually happen:

When this happened it broke my heart.

The signs are there even before you reach this point. Cassandra’s response to flirting is telling; she’s pleased (she approves even if you’re a woman) but her laughter is awkward, her change of subject sudden and abrupt. It’s clear that Cassandra doesn’t know how to react to this interest in her. And eventually it reaches a point where she is genuinely concerned about not just herself, but about you (well, your avatar) as well.

It’s not my Inquisitor in that video, but the person who uploaded it makes similar decisions to mine. Where we differ is that in the second choice, I didn’t try to convince Cassandra; I picked “I do understand” instead. In that instance, your Inquisitor tells Cassandra she doesn’t owe you an explanation, to which the Seeker responds that “No, in fact, I do.”

I think most of us understand how painful unrequited love can be. If you grew up queer (as I did), there’s an additional layer to that experience: being in love with someone who you know not just doesn’t return your affections but, really, can’t. In many cases, these feelings are for the people in our young queer lives that are our support network. As a wee gay in the mid-90s, my close allies were very, very few and I was assuredly in love with at least one of them. It’s a feeling you learn to bury, or at the very least, to try and transform into a different kind of closeness, so that you don’t lose something very important in the process. If you’re lucky, you can deal with it all on your own.

Sometimes, though… sometimes this sort of conversation is inevitable, and I’ve had them myself. They suck. But they are good, in a way. They can be useful no matter how much they hurt.

But they do hurt. And I think this scene is made all the more gut-wrenching by Cassandra’s tone of voice and body language. She is nervous, uncertain; she doesn’t want to hurt you, but she knows that to continue on as you have is going to hurt you eventually. And since you the Inquisitor have not shown any signs of stopping, Cassandra wants to put a stop to it now, before it goes too far.

Now I’m certain people may be saying “Why does she have to close it off? Can’t she just have good humor playfully flirting?” And I imagine it could, if Cassandra were a different person. If it were Iron Bull, for example (well, and Bull weren’t pansexual), I don’t think it’d be a problem. But Cassandra is who she is, and to be honest, I think expecting her to go on flirting with you when it makes her uncomfortable is selfish. She has every right to shut it down.

When this moment happened, the reality of it hit me hard. But I bring this up not to discuss the narrative content — wonderful though I find it — but the mechanical side. If you consider a Bioware romance a “success” then this scene is a fail state. You fail to romance Cassandra no matter how hard you try, because she shuts you down. But it’s a fail state that has a very meaningful endgame in terms of characterization for Cassandra and, really, in me “roleplaying” my Inquisitor.

The game lets me make decisions that it knows from the start — that I know from the start — are going to go nowhere, but the point is that the “outcome” of those decisions doesn’t matter. The journey, my deepening relationship with Cassandra, is the point, and no matter how sad I am that my Inquisitor can’t be out there with this amazing knight at her side, I’m happy that I got the chance to try, and to see that side of her.

3 thoughts on “She’s Not That Into You”