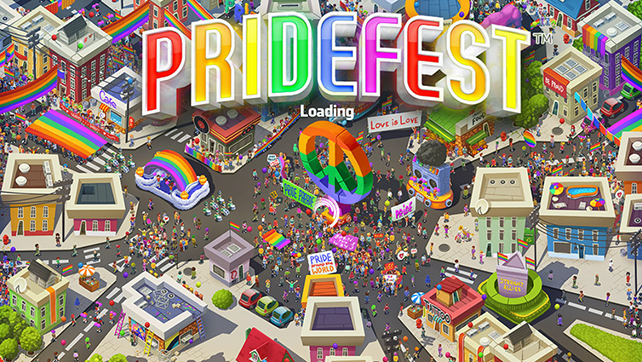 So, Pridefest happened at last.

I heard this today from my friend Bryce, who was engaging the “oh goodness, do I play this?” internal argument. I then had the same internal argument before deciding: yeah, I should see what is going on with this. And so I picked it up, since the game is free-to-play microtransaction mobile game territory which is familiar.

While I haven’t spent much time with it — maybe 45 minutes or so, since the iPad version crashes every single time and playing it on my wee iPhone 5s is a challenge — I believe I’ve spent enough time with it to make some initial commentary about this game, and more particularly about where it sits now, in the world of games and queers in the media in 2016.

How should I describe this game? Let me try a screenshot, since a picture is worth a thousand words, right?

I think that says it nicely.

Pridefest is media-gay Cityville, point blank. To be honest, I have a hard time disliking it when it comes to the game’s surface qualities. In Pridefest you are the mayor of a city that is just… drab and run down. Literally drab and run down: the initial map is characterized by its vast swath of uninteresting grey buildings arranged into neat grid blocks. As Mayor, you are challenged to bring life and joy to this town by filling it with Fun™, which you can then use to upgrade buildings from Dull Heterosexuality, which sits there doing nothing but looking sad, into Rainbow-Hued Gayness, which produces resources you can use!

As a mobile free-to-play game it has all the features you might imagine it would: you can customize your Mayor (including an option for “they” pronouns, which is nice to see, at least) with clothing and looks, invite both friends and total strangers who play the game also to live in your New Fabulous Rainbow-Gay Homes, connect on Facebook, spend real life money on in-game currency, etc. All while a sort of laid-back neo-disco song plays on loop in the background.

Before I go any further into the analysis of Pridefest I want to say that despite myself, the game’s colorful, peppy, Rainbow-Gay aesthetic is actually fun and pleasant to look at. Casual and mobile games usually involve a lot of what Jesper Juul called “juicyness” in their aesthetic and Pridefest does this too. It’s cute and silly and more or less inoffensively Rainbow-Gay (should I be saying Disney Gay? Does that get the point across) and on that level: okay, fine. Enjoy.

This is also the game’s major problem: it has attempted to depoliticize itself and in doing so is really politically ignorant, especially so of the fact that it is impossible to depoliticize something like the game’s very topic. Let me give you a few examples of this.

Look at this option for upgrading one of the Dull Heterosexual buildings into a Rainbow-Gay money producer:

This really struck me. Hey, I injected enough Fun™ into this neighborhood. Now I can turn this boring old Dull Heterosexual building into an upscale expensive Organic Food Store because the gays sure do love organic food, and not inorganic subsistence cubes like the proles.

It doesn’t take much to process the unnamed Pridefest city as a San Francisco analog; the Bay Area is now almost mythical in its idealized identity as the Queer Arcadia, the Gay As Fuck Elysium. Considering SF’s current problems with gentrification pushing people out of the city — through, say, upper class white folks who demand nearby organic food stores and other such institutions — and often into homelessness, the idea that Pridefest is a game where you inject Fun™ into neighborhoods to make them Gayer Than Before via Fancy Goods and Services seems… sorta icky?

There’s also the way in which Fun™ is distributed: pride parades.

Most of the Pridefest gameplay is the city building simulation part. However, before you can upgrade any Dull Heterosexual buildings into their money-producing Rainbow-Gay counterparts, you have to fill their meters — see the empty rainbow-colored things? — with Fun™. Once a building is sufficiently Fun™ you can convert it (see above screencap).

You inject fun into neighborhoods with the other part of the gameplay: running a parade. You fill your parade with people and floats, and then literally run it through the streets. Every building you pass gains Fun™ as your pride parade emits Rainbow-Gay like some sort of unreal unicorn-powered propaganda truck (though hilariously each building can only receive Fun™ once from each parade so you’re encouraged to make your route as wide-ranging as possible). The actual gameplay lets you control your route at intersections by swiping, and lets you collect various things — money, unlockables — as well as forcing you to avoid obstacles that prematurely end your parade.

The parade stuff that I have unlocked at the beginning is sort of hilarious: a gang of bikers (presumably a reference to Dykes on Bikes, though bikers seem to be common enough in pride parades in general) and what they call an “80s Float,” because nothing says Rainbow-Gay like a Peter Gabriel ballad.

I think the parade mechanic is where Pridefest‘s Rainbow-Gay aesthetic comes back around to bite it in the ass. The idea that you march your Gay As Fuck parade around the neighborhood, filling everyone’s hearts with joy, is couched in a rhetoric of queerness — and more importantly, public consumption of queerness — where queer identity is safe, sanitized, and is basically the sexuality equivalent of the “magical Negro” trope. In a Queer Eye for the Straight Guy way, the Rainbow-Gay of Pridefest‘s aesthetic comes into the life of Drab Boring Presumed Heterosexuals and in their prismatic wake suddenly everything’s full of… well… Fun™.

Bryce talked about this on twitter as well, and I think he’s spot on with a couple related points:

Which is true in a lot of cities (and magnified a thousandfold in SF because, as I said, Queer Elysium).

I think that’s the real “not sure about this” I have with Pridefest: it is a safely depoliticized, “Rainbow Marketing” vision of queerness… and the real problem with this Rainbow-Gay expression of things is that it is almost always how queer culture is packaged when it’s vendored — and I do mean vendored — to straight people. It’s the Will and Grace of mobile games.

All that being said, I want to stop and explore this a little bit, before I close this blog post out.

We’re at a weird time when it comes to the place of queerness-for-consumption in the media. We’re at a time when the long-held vision of “queer” as being exclusively “a 70s-80s vision of cis white gay male urban culture” is finally being challenged, when we are looking beyond (or should be looking beyond) the L and the G in LGBT+ (and to be honest, the L wasn’t getting all the attention they deserved or needed either). But the Will and Grace-s of the world actually got at least some vision of queerness into the media, representationally speaking.

So while I’m weirded out at Pridefest‘s toothless attempt at depoliticizing things, I find myself having a hard time being too mad at it. We’re at a point where a big ticket video game company (okay, it was Atari, so… medium-ticket) put a bunch of resources into making a slickly produced, if kind of soulless, mass market gay (and I use “gay” rather than “queer” purposefully here) game, without much incident. It’s just sort of there.

I am 37 years old and was a wee gay in the early-mid 90s. That’s not as far back as some, but in the lightspeed world of games culture, it’s farther back than most. If you’d asked me in 1995 if I ever thought there’d be enough video games with queer stuff in them that I could look at a sort of mass market spectacle gay game and go “Eh, it’s cute but it’s not for me,” I am pretty sure I’d have said “no.” Basically: the fact that Pridefest is cute but bland is, in its own twisted way, progress.

Also, I feel the need to point out that dealing with how people received A Closed World in both the straight and queer worlds has taught me a lot about this stuff. When I read criticism from queer devs who were upset that our game, with its mostly straight dev team, wasn’t queer enough,” I got pretty hurt (and I still do, sometimes). So I’m not ready to baby/bathwater Pridefest just yet, even if I find its utter disconnection from queer political life to be kind of offputting. I don’t know what that dev team was like. I don’t want to say “YOU DON’T UNDERSTAND WHAT QUEERNESS IS.”

At the same time, though, I would say: I don’t necessarily think Pridefest is a “gay game” in the sense that you’re going to learn anything about queerness, or understand LGBTQ+ issues better, by playing it. I do think it’s a brightly colored, generally pleasantly-toned game that just happens to use somewhat stereotypical gay culture iconography to sell itself. Is that a reason for players — particularly queer players — to say “no thank you?” Sure it is. Is it okay to play the game and like it anyway, regardless of who you are? Sure it is. I’m not interested in the current critical sphere’s intense need to determine if something is Elementally Bad or Inherently Good. You don’t need anyone’s permission.

I think it’s fine to want to consume this Rainbow-Gay vision and just want to have fun and feel good. I’d be lying if I told you I actually smiled a bit at the idea of my little parade marching through Definitely Not San Francisco, shouting “WE’RE HERE! WE’RE QUEER! FUN™ WILL NOW COMMENCE!” like a tiny homosexual army. Also look at my cute little city hall.

And if there’s an unintentionally good side effect of the attempt at depoliticization, it’s that Pridefest doesn’t make a lot of the mistakes that Gay Fighter Supreme did: no reliance on harmful racial or gender stereotypes for its jokes (as far as I’ve seen yet). Avatar creation is generally gender-agnostic in that all clothing etc. options are available regardless of what pronouns you pick.

I imagine you may now be wondering what the deal is with this post, now that we’re at the end. “Am I supposed to love Pridefest or hate it?!” Well, that’s up to you.

As a game that speaks to Real Queerness, it fails to show the political realities of not just queerness in general, but as Bryce noted, the institutions of queerness the game specifically emulates.

As a cute, Rainbow-Gay skin poured thick on top of a Farmville-alike free to play mobile game, it’s fine, and in fact considerably less offensive than I imagined it could have turned out.

So as much as I’m not sure Pridefest is going to get a lot of my time, I think I’m okay with a world where a game like Pridefest can roll quietly on in the background, rather than being a conversation-dominating iceberg around which we all must sail.

One thought on “Fest Be Not Proud”