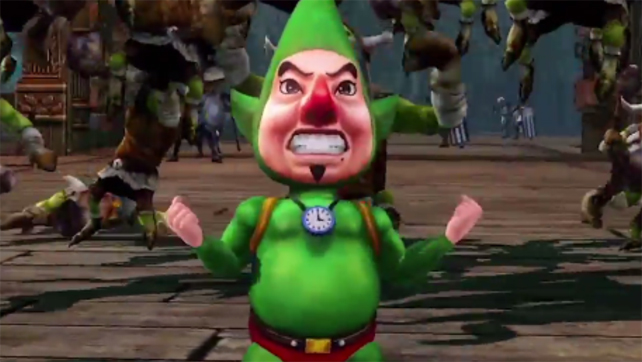 So as some of you may have read, yesterday Kotaku’s Stephen Totilo posted a story based on an interview with Zelda mastermind Eiji Aonuma about Majora’s Mask and other topics. One of said other topics was the creation and history of series NPC and running gag, Tingle. And if you follow me on Twitter? Well…

Totilo asking if Tingle is gay kinda boils down to him asking: "Come on. Our gross, homophobic read of this character is accurate, right?"

…you know I had Feelings™ on the matter.

Totilo’s certainly not the only one to blame here — we’ll get to that in a moment — but generally speaking, I’m a little tired of how characters like Tingle are used to confirm existing, harmful ideas about queerness while simultaneously being used to suggest those harmful ideas aren’t real or harmful. More on this after the cut.

An interesting thing about Totilo’s article that many people may have missed is a link to a story from GayGamer that proclaims Tingle the “gayest video game character” of a list of 20. While that article certainly exists, I think its casual insertion into Totilo’s story leaves out one important fact: it’s from 2006, which was almost a decade ago when queer characters were still finding their way into mainstream games and much of the explosion of altgames queer content hadn’t happened yet. Also, a site by and for gay gamers is a different context. This isn’t to say that I agree with the GayGamer story’s read, which seems to focus pretty intently on very old stereotypes of gay men (a Paul Lynde reference is lost on today’s youth, for sure), mind.

But honestly, when Totilo says that most of us thought Tingle was gay, he’s not wrong. And the reason why isn’t hard to grasp; Tingle is effete in many ways, from voice mannerisms to unusual clothing. He’s a man in his 30s who wants to be — or believes himself to already be — a “fairy.” He talks to Link, particularly the child-like Links of Majora’s Mask and Wind Waker, in a vaguely uncomfortable way that can easily be read as verging on the sexual. His mannerisms are big, dramatic, silly. He is, in a nutshell, “queer” in the more denotative use of the word, i.e. “fucking weird.”

This is where I admit: I really don’t like Tingle. He makes me uncomfortable, and part of the reason why is that he ticks off all these boxes that would make a straight audience in the US think he’s gay. I hope that makes sense to you? That I see this character who’s the emblem of many stereotypes I’ve had to push back against most of my adult life, and I’m just like UGH WHY CAN’T YOU GO AWAY. And honestly, as my friend Abe Stein pointed out, the real kicker comes at the story’s end… not when Totilo asks if Tingle is gay, but the response:

In any event, there are three parts of Totilo’s admittedly brief story that are about Tingle’s supposed sexuality: the mid-story ref to Tingle’s “gayest character” award from GayGamer, and then these —

Presumed by some—incorrectly, it turns out—to be gay, he is one of Nintendo’s most unusual characters.

All well and good, but I had to ask: Is he gay?

To put this in perspective, that first line about Tingle being “presumed by some… to be gay” is the second sentence of the story. Let me repeat that: it was important enough, in Totilo’s eyes, to be the second thing you read if you start the story at the top as most readers would do. This is not an insignificant thing; it is a framing moment, a tone-setting statement. “You came to read about Tingle, so we’re definitely gonna talk about if he’s gay or not.”

The other sentence, about how Totilo just “had to ask” if Tingle was gay, is the third to last sentence of the story. So this discussion of whether or not Tingle is gay — which is, all told, these two lines and Aonuma’s reply — bookend this story about Tingle. It’s the first thing we read, it’s the last thing we read. Which is really unfortunate, because the meat of the story where we learn about Tingle’s design is actually really cool. The idea that he became this weird caricature of Peter Pan because they wanted to give a good, interesting in-universe explanation for their map system is kinda neat. It’s certainly more interesting than if he’s fucking gay or not, which is — not to put too fine a point on it — irrelevant.

This is why, when I read that Totilo just “had to ask” if Tingle is gay, my reply was: “Did you, though?” I look at the structure of this story, with its prurient bookends about Tingle’s sexuality, and I have to wonder: where did this journalistic decision come from? Presumably it was of interest to Totilo himself, but that’s not enough to craft a story for a site with as big a readership as Kotaku’s. The answer is that he thought it would be of interest to his readership, too. And I imagine it would, but the important question here is, why? Why would they find it interesting?

It isn’t a big leap to say: because a lot of them think Tingle is gay. But as I’ve already said, this read of Tingle as gay is borne out of damaging and outdated stereotypes. The only real reason asking Aonuma if Tingle is gay or not has any apparent relevance is, as I said perhaps a touch angrily in the tweet at the top of this blog post, to confirm our ugly and, yes, homophobic vision of those stereotypes.

Totilo was not asking if Tingle is gay because it makes a difference to LGBTQ players. He doesn’t ask any interesting or probing questions about Tingle’s presumed sexuality. It’s a throwaway joke, a “haha we think Tingle’s gay but he’s not I guess” moment that really, really upset me. Because now I’m the joke twice over: “haha Tingle’s gay because he’s weird and dramatic and flamboyant and that’s what gays are” and “Haha, people thinking Tingle is gay is a haha joke we’re gonna make.” That really sucks.

In closing, I just find this disappointing. It’s the sort of throwaway content that I look at and go, “Why is this even here?” And the answer is never satisfying: because it was an easy joke. Well, it’s an easy joke at the expense of a lot of people who’ve been the target of such easy jokes all their lives, and seeing someone make it just to please an audience by reaffirming their damaging stereotypes really sucks. It’s super disappointing to see Kotaku resort to it, and I hope they’ll take steps to avoid making this sort of silly and unnecessary step in the future.

EDIT: I just wanted to note that Stephen read this piece and offered a response on his Twitter feed, which I’ve included here:

I also wrote a few replies to his tweets that are relevant:

One thought on “Dog and Pony Show”