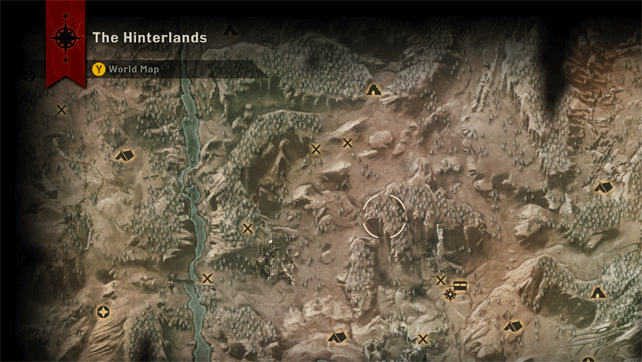 So I’ve been doing everything in my power to… well, power through the end of Dragon Age: Inquisition, since I’ve already sunk 70 hours into it. With the sudden reversal of the games press’s game-of-the-year sentiments, it seems like now is the time before my motivation evaporates.

Probably the most widely-discussed critique of DA:I to make the rounds lately was by Patrick Klepek in his new job at Kotaku. I didn’t get along with that article terribly well, not because of its sentiment — which I agree with, as we’re about to discuss — but its phrasing, as I bristle whenever there’s the implication that some ways of engaging a game are “meaningful” and others by extension are “meaningless.” But that’s neither here nor there.

Certainly, the discussion right now seems to be centered on what I am calling the game’s “MMO bullshit:” pointless fetch quests with no strong narrative ties, no meaty rewards, no fun party banter. Just, as I said on Gayme Bar’s year in review show for 2014, “endless runs to Wal-Mart in the Wal-Mart Hills.” And like Klepek I think they don’t do much for DA:I, which is a problem because the game is full of that content. The main storyline, what would normally be called the “meat” of the game, is quite small by comparison.

However, the point of this blog post is to point out that this sudden explosion of “MMO-like” content doesn’t come out of nowhere. It is, in fact, a positional response to critiques of Dragon Age 2. And it is that situation that led me to make this tweet, this afternoon, as I tromped through the Hinterlands in DA:I —

Since there are some potential spoilers (and uh, naughty language) involved here, more after the cut.

Alright. So as many of you may know, I identify as a cis gay man. Part of that identity (for me, anyway) is that speaking merely in terms of bodies, I am sexually interested in penises. I also have sort of a secondary interest in our cultural discourse about dick size, because I’m interested academically in how we talk about and construct gender and gendered bodies. So, you know, this is both a job and an interest.

I think in the US, at least, our media culture is pretty firmly entrenched in telling us bigger is better, especially when it comes to cocks. In “mainstream” cis gay male culture this is especially apparent. It’s not really the purpose of this blog post to delve too deeply into this topic, since I think it’s a pretty easy surface assumption to make, but if you want to experience it firsthand, take a look at three highly interesting NSFW subReddits: /r/massivecock, /r/tinydick, and /r/sizecomparison (there are more, believe me, but these three are more than enough).

However, as someone who has had sexual encounters that involve… well, dicks, I can tell you from my point of view, bigger is not always better. In a lot of ways, for sure. I’ll ask you to take my word for it on a few of them, but if it helps me make the point, here’s the really obvious one: If your partner has and is using a very large cock, many types of sex just straight up hurt.

Consider anal penetration. It’s difficult, and it can be painful, and you’ve really got to put in the work (and use considerable appropriate tools like good lube etc.) and frankly, the bigger they are, the harder bottoming is. Oral sex is basically the same; you don’t want to feel choked and gasping for breath might be hot for them in a power trip kind of way I can tell you from experience, it makes me feel terrible. What I’m saying is: if we’re talking about what I as a partner want? Smaller and more manageable is considerably better. There are other ways this comes up, too; for example, the ways in which the well-endowed can come to think that their large cock is all they need (or all anyone wants) so they never develop good skills to please their partner and instead rely on their big dick to be “enough.”

So in a way, yeah: it’s hot to look at a big dick. That notion of power can be attractive, even if the system it exists in is thoroughly fucked up. If this topic interests you I suggest looking up the concept of “small penis humiliation” (oft abbreviated “sph”), where people with small dicks get sexual pleasure from others mocking them for it, often in the context of someone else (sometimes but not always the person doing the mocking) having a comparatively much larger dick. There’s an intense degree of domination/submission play involved there, with actual slave/master relationships following along in many cases, and so that notion of “power” behind dick size is pretty reinforced.

If you want a pretty tight summary of my thoughts in the previous few paragraphs, here’s another tweet I made earlier:

Like, huge ones? Really nice to look at, but when they're actually in my hands, I mostly go "Well now what am I supposed to do?"

So there you go. That’s my opinion on big dicks: nice to look at, but once it’s literally in my hands, once I’m doing something with it, big just means confusing and off-putting. I’d rather go small.

If you’re a Dragon Age fan you can probably already see the parallels I’m about to discuss.

Let’s talk about Dragon Age 2 for a moment. The setting of that game was the city of Kirkwall, in the Free Marches, as well as its most direct surrounding environments (locations like Sundermount in the nearby Vimmark range and the Wounded Coast). It’s reasonable to believe that DA2 takes place in a geographic area probably no bigger than the Chicago metro area, say. It’s compact. This wouldn’t be a problem had the game included a diverse number of actual in-game visitable places, but DA2‘s environment count was very low, meaning the same places were revisited over and over again, often with only 1-2 rooms’ worth of difference. Instead of feeling like a familiar, close place it feels tedious and dull. As much as I love DA2, this is among its worst failings.

Now, DA:I by contrast has some really immense zones; they joked during development that you could contain all of DA2 inside just one of DA:I‘s larger zones, and if you’ve been to The Hinterlands or the Hissing Wastes this is an easy claim to believe is true. And those zones are filled — practically to bursting — with Things For You To Do. In true Skyrim style, the map overflows with little icons that scream “Open world game!”, filled with the promise of content. Most of that content is… well, trips to the Wal-Mart Hills to pick up milk and eggs. And this content comes in many ways as a direct result of players critiquing DA2‘s limited number of locations; rather than claustrophobic Kirkwall, DA:I‘s Orlais (and Ferelden) are vast indeed.

Now, so I don’t become a total hypocrite: there’s nothing inherently bad about this sort of content. MMOs are built on it; lord knows over however many years of World of Warcraft I became a world class Wal-Mart Runner. But as Klepek did say in his article, MMOs tend to take some of the potential sting of this away by letting you enjoy the experience with other live people; online chat features and group content mean that the gameplay of the game fades into the background, becoming a sort of intermittent hum while you engage with your friends doing a thing.

DA:I doesn’t have that, though, and… well, to me it’s the big cock that’s nice to look at but confusing to engage. It’s gorgeous; even on my limited PC with graphics settings on the lower end, DA:I‘s Thedas is grand in scope, wide and wonderful, much like the eponymous setting of Skyrim. But when I actually go to engage with it, to DO things in it, it feels empty and confusing and to be honest, sometimes pretty annoying. Shard-hunting is probably the egregious offender that many players I know refer to. And as long as we’re extending the sexual metaphor, all this low-intensity content makes DA:I feel like the huge cock you’ve been working for hours and just will not come no matter what you do.

And honestly, part of me wonders if this is also a similar moment to the person with the big cock who just whips it out and is like “check out how big it is, hot right?” Our approach to how games look and feel in the AAA space right now has plenty of fetishism for technology involved, and how we look at “open world” games is distinctly fed by the “look at all the things you can do!” without too much interrogation of what the things actually are. The offer of spectacle is often presented as enough.

By contrast, DA:2 might be repetitive and claustrophobic, but your close-knit group of companions are much more active and talkative about it than they are in DA:I. It’s not clear if this by design, or because a well-known bug in Inquisition inhibited party banter, but generally speaking they had little to say about quests when I did them. This was much less the case in both Origins and DA2, in my experience; these close-knit compatriots were chatty, experiencing it with me. I didn’t have a real person to engage with to defray the MMO bullshit, but I did have virtual ones… and I don’t think I need to discuss with you how close people’s relationships are with the NPCs of the Dragon Age universe (even in Inquisition).

If I’m having sex with someone that has a less-than-huge dick, I am not focusing on “what do I even do with this?!”; I am focusing on them, as a partner, and what we are doing together, as people having sex. By making the (for lack of a better word) mechanics — maybe the hydraulics? — of the act fade more into the background, the act itself becomes a thing I can focus on. DA2 was the same, for me; yeah, it has its share of tedium, too. But often times that tedium was an excuse to hang out with my awesome digital friends, and so I was way more okay with it.

You can see the skeleton of the Mass Effect series under DA‘s fantasy skin. You have the first game of broad scope about saving the world as you know it, followed by the smaller-scale and more personal game about a close-knit set of companions, and then the final game about resolving the world-threatening aftershocks of the events in the first two games. So I can’t necessarily fault DA:I for broadening its scope past a single city compared to DA2‘s Kirkwall. But I’m not sure the approach they took is the best one.

I actually was going to make a joke here about “it’s not the quantity of content; it’s how you play it” but I realized the oft-used “it’s not the size that counts, it’s how you use it” joke is really just penis size shaming in disguise, the sort of line presented as a mantra everyone knows is false but repeats to make themselves feel better. And as I said: for many players, there is plenty satisfying about this small, repetitive content, just like there are many people who not only don’t mind large dicks but actively seek them out, and find sexual contact with them satisfying.

But me, I’m not that guy. I’d rather have something smaller in scope with which I can really engage — be it a game, or… well, a dick.