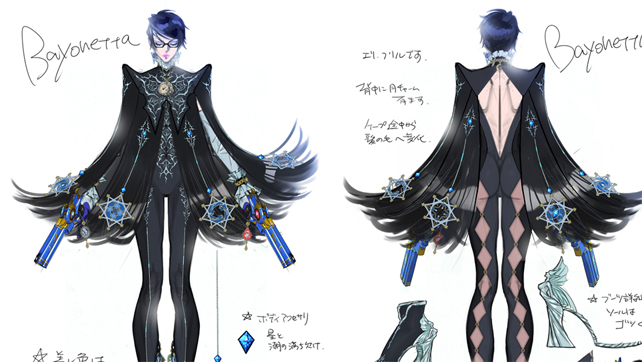 So both the Devil May Cry games (which are Bayonetta‘s spiritual ancestor) and the Bayonetta games themselves take place in a world where the “trio of realities” is a major shaping force on the world. In Bayonetta, these three realities are Paradiso, Inferno, and the Realm of Chaos, aka the “human world.” Between all three, connecting them to a certain extent, is Purgatorio, a sort of adjacent, Ethereal Plane-like MacGuffin which makes Bayonetta invisible to normal humans while she walks through the cities of Vigrid and Noatun, but also able to interact with the supernatural forces arrayed against her.

In one of the better little jokes of Bayonetta 2, series staple and journalist Luka Redgrave has managed to get a gift from Rodin: a pair of glasses that let him see into Purgatorio. I’d like to believe that Rodin managed to get Luka in the end, however, considering the design of the glasses (which you can see off to the left). The first time I saw Luka in those glasses, I heard myself say “Why hello, Professor Trelawny!” without thinking. You’re welcome.

In any event, the idea is that in the Bayonetta cosmos, the messengers of Heaven (Angel) and the denizens of Hell (Demons) exist alongside us every day, perfectly imperceptible to us except for those humans who go out of their way to acquire the talent or equipment to do so. Those humans who have magic powers, like Umbra Witches and Lumen Sages, can voluntarily enter or perceive Purgatorio with magic.

So how does this cosmology contribute to the series bringing me joy? Find out after the cut (spoilers for Bayonetta 2 as well).

Right. So as I’ve said before, the primary enemy of the Bayonetta series are Angels. These messengers of Heaven descend from their home realm, Paradiso, which is a gold-tinged, sun-kissed mirror of our own world, running alongside it like an additional layer. Their predominant color schemes are white and gold, though a number of very specific angels — such as the “Grace” and “Glory” enemies in the first Bayonetta with their stark red and blue color scheme — that are slightly different.

The interesting thing about Angels in the Bayonetta universe, though, is that their seemingly beautiful and pristine appearance is, well… a facade. When Angels first appear they seem perfect, like living sculptures of marble and gold, but one Bayonetta has beat the snot out of one for a while, chunks of that facade fall off like broken armor pieces (sometimes LITERALLY as broken armor pieces). Underneath, the Angels are actually grotesuqe, with big swaths of rubbery, exposed musculature, rotating, angry eyeballs, dripping blood and saliva. Angels become grotesque in short order. (I tried to find an example of this from an everyday enemy, and couldn’t)

This impact is at its most obvious during boss fights, particularly Bayonetta‘s boss fights. The four giant Cardinal Virtue angels Bayo fights — Fortitudo, Iustitia,Temperantia, and Sapientia — start at these gigantic, towering pictures of Angelic perfection. By the time Bayo is done with them, though, the monster within has been revealed, and in Iustitia’s case the difference is stark:

Even in his pure angelic form, Iustitia is kind of grotesque, but once Bayonetta’s through with him, it is literally a giant floating ball of blood, entrails, and cherub faces before demons drag it to hell to feed. I love the message this sends about ideas of beauty, and “goodness,” and being servants of God. The Divine Comedy, upon which Bayonetta‘s cosmology is largely based, takes a typically Christian view of Heaven as a place of eternal goodness and peace, and Hell as an eternal jail of suffering. But in Bayo’s world, angels are predators of human souls just like demons are; they are more “pleasing to the eye” but they are also great prevaricators and liars in that process. They lie, cajole, and use illusion to get what they want, which is human faith and souls. Bayonetta, as a representative of the darkness, has the ability to crack that facade — literally — and reveal the true monsters beneath.

I mean, the famous “Bayonetta vs. Bayonetta dance fight” is a powerful type of angel, a “Joy,” impersonating Bayonetta to kidnap Cereza:

The beauty of this, of course, is that the angel doesn’t bother to hide its halo, for starters. And secondly, the disguise is a bust because duplicating Bayonetta’s fierce personality and style is impossible. Bayo represents “true” beauty — that comes from within — while the Joy’s “beauty” is artifice.

Now, in Bayonetta 2, infernal demons also become potential enemies. However, they are not quite as deceptive. In fact, the demons don’t substantially change, physically, upon taking damage in the way that angels do. In that sense, the presentation of demons feels more… fundamentally honest? They never claim to be anything other than what they are, and any underestimation someone makes of them is not part of an angel’s deception, but rather that individual person’s gullibility. Consider one of the major story bosses in Bayonetta 2, Alraune, who is a “rose demon.”

Even her “monstrous” second form is still beautiful in its own way, but it never claims to be anything but a monster that devours. If we fall for the temptations of the dark side, that’s our fault for not being critical enough. If we fall for an angel’s deception, though, the blame is shared. We should be careful… but they go out of their way to deceive us.

In closing: I love how Bayonetta as a series deconstructs this idea of “beauty” automatically equal to “good” or “righteous.” In fact, it’s generally the servants of the darkness that are the “good guys” in these games, and it’s not because they are beautiful — though certainly, they are — but rather because they totally and utterly know themselves, and never claim to be anything but what they truly are.