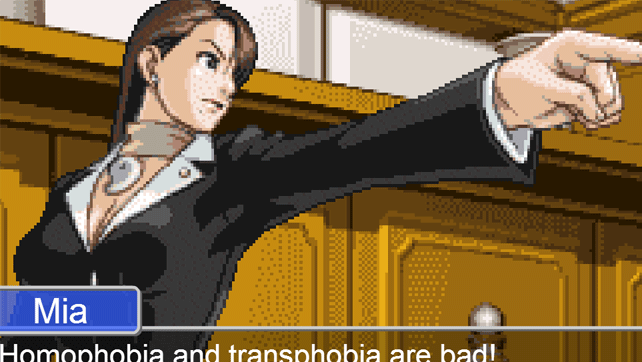 Welcome to a couple of whiplash weeks for queer representation and themes in pop culture, especially games; from Kung Jin and Bobby Drake right around to yesterday morning’s fantabulous and short-lived Steam Greenlight game about killing gay and trans people. I wish there was a punchline here, but there really isn’t one. Someone actually, and apparently without any real stumbling blocks along the way, put up a game on Steam Greenlight for your vote where the entire point of the game is to kill gay and trans people in a badly-produced FPS.

In the interim the creators of Kill The F****t, Skaldic Games, have released a statement about the game which you can utterly and totally ignore (I’m not even sure why I linked it for you). It is every thoughtless lunchbox’s after-the-fact deflection that they did anything wrong which says two things:

If you want me to run down their utterly garbage, entirely pointless response at some point I’ll do it on request, but believe me: you don’t need to read it. It’s pointless. And frankly, no “explanation” would ever be enough.

Honestly, this story is all backdrop for my real point. Within an hour or two, Valve had removed the game from Steam Greenlight. This was the right reaction, obviously; you can’t leave the thing up. It needed to come down. There’s a much larger concern of how it got there in the first place, when it feels like there should be a system to prevent that, you know? As a friend put it:

Anyhow. The game is gone. And since then, Valve has said… well, nothing. At all. No statement of any kind.

You’ll recall that the debacle surrounding genocide game Hatred and its removal from (and then return to and subsequent greenlighting on) Greenlight also passed without significant comment from Valve; the only communication from them on it is an email the creators showed on Facebook which they claim is from Gabe Newell himself (and for which I suspect there is little substantiation, which is fancy speak for “it’s probably fake”).

Likewise, it’s been 24 hours+ since Kill the F****t came off Greenlight and Valve has not made any sort of public statement about the game’s removal, or how it made it past the system, or why it came down. Nothing. The game was quietly disappeared, dropped off the Greenlight map without comment.

And you know? That’s just not enough for me. It really isn’t.

I really don’t know much about the economics of Steam; I’m a begrudging rather than enthusiastic PC gamer. Tzufit of the Justice Points podcast took Steam’s presence as what amounts to a near-monopoly to task in the most recent episode, and I am certainly inclined to agree with that assessment based on my limited exposure. Steam has the dubious honor of being a necessary evil in my home for many reasons, and I have no attachment to its success.

But I find this sort of cowardly refusal to speak out on an ethical issue insulting. I mean, this is capitalism; I already knew that Valve doesn’t really care about me. At the same time, though, this was a game literally about killing gay and trans people. There was nothing else to it. Killing and offensive, hateful slurs were baked right into the title. Saying “this was hurtful hate speech that we don’t condone on our service” is the lowest, the absolute lowest possible bar they could clear, and they can’t even be bothered to step gingerly over it.

Think about that. When institutions refuse to take action in this way, you have to assume there is either a 1.) lack or 2.) short circuit somewhere at the policy level. Because Valve not saying anything makes me ask, as a media critic, “Why not?” As I say, what possible reason could you have for not saying “We won’t accept blatant homophobic/transphobic hate speech on our service,” even in like… a tweet or a Facebook post? Yet neither of these happened.

I mean: they removed the game. That’s just a demonstrable, provable fact, so I don’t feel like not saying anything is to “hide” it because that is functionally impossible. So is it to avoid taking a moral stance in the media? To appear “neutral” and to avoid attention? I guess it might be, but at that point my sympathy is massively limited. Also, if you want to avoid attention because you showed — again, the lowest possible amount of — support for LGBTQ people, then I kind of want nothing to do with you as an institution.

And I guess that’s where I am at. Whatever their reason, Valve not making a statement means that any reason they have is more important to them than showing even a tiny amount of care or respect for LGBTQ people. And like… is there any reason, any reason at all, that trumps that amount of basic human decency? Is there any logic they could deploy — ethical, moral, or most likely market — that makes that compelling?

Seriously. Valve, show it to me. Show me the reason that’s gonna make me say “You know what? Okay. I’m fine with you tacitly implying that I, and people like me, are not worth showing public support for, because of what you just said.”

I won’t hold my breath.

4 thoughts on “See Something, Say Something”