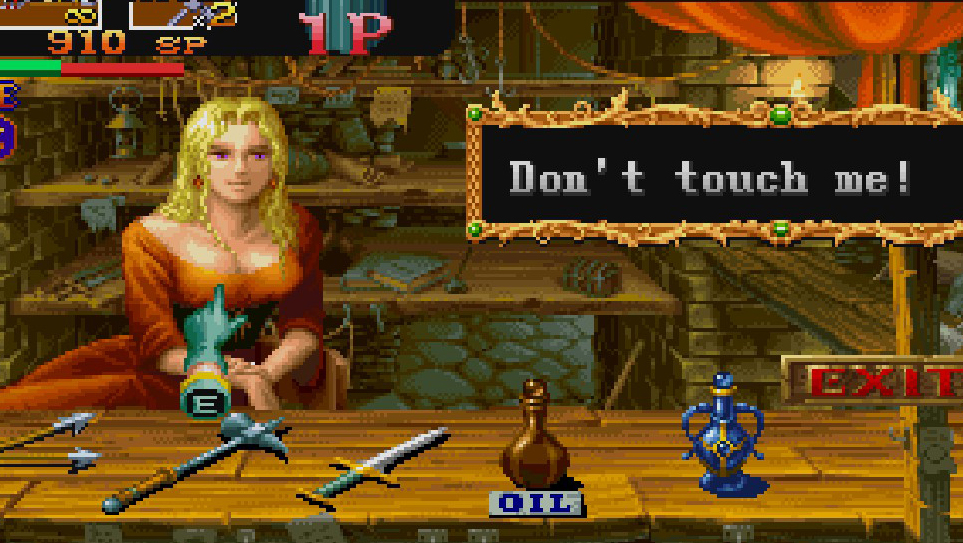 It’s come back into my life recently, as I have been playing it on my Vita (it’s a surprisingly good fit for that system). Also spoilers, despite all its art style problems I thoroughly enjoy Dragon’s Crown, as it’s an exceedingly well-crafted and satisfying brawler.

Content warning for sexualized images of women, so check for the rest of this post behind the jump:

It’s not just the PC women, but also a bevy of NPCs, many of whom are not just presented in bizarre poses of sexual availability, such as this lady warrior monk complete with literal key-and-lock chastity belt who sits there moaning the entire time:

But there’s also the issue that the game uses a mouse-like point/click interface on both the PS3 and the Vita (literally, on the Vita; it’s controlled with the front touch screen) and so you can, in many cases, actually touch these women. Sometimes this elicits dialogue lines or more often, more moans/sounds/etc. Feel free to check Google Images for a sampler of these often hypersexualized women in utter distress (my favorite is the mermaid whose fish tail starts below her human ass, meaning she has a fish tail and an exposed human booty).

I can tell you from past experience that I’ve had online multiplayer in Dragon’s Crown where three other players refused to let the game move on because they were obsessively clicking an NPC’s breasts at a story checkpoint (you can see the other players’ cursor-hands in online play). That is a super gross feeling, having to sit there watching people molest fictional women right in front of you and that you can’t move on because they refuse to stop. Really just awful.

And the game never really punishes you for this, either. Oh, sure, there’s a joking hint that if you touch equipment shop owner Morgan’s boobs, she’ll punish you for it…

But it never really happens. In truth, this is as much an homage to Dragon’s Crown‘s spiritual (and somewhat literal, since George Kamitani worked on D&D: Tower of Doom for Capcom) predecessor, Dungeons and Dragons: Shadow over Mystara, where this also pops up:

Hilariously, you can’t do that in Tower of Doom. Steadily moving backwards, apparently.

The point, though, is that no matter how many times that text floats by about Morgan petrifying your lecherous paws if you keep applying them to her digital breasts, that threat is never followed through on. Even this woman, who by the tone of the text should be threatening indeed with her vast powers, is rendered into a harmless toy for your anime tity amusement.

Crucially, I think this is the point at which these depictions veer away from scenarios like Bayonetta, who is also hypersexualized but whose sexuality is threatening to those who might objectify her, in large part because she at least expresses a degree of agency. In her review of Dragon’s Crown mentioned above, Danielle says something similar:

Two player characters — the Amazon and the Sorceress — are explicitly sexualized, with breasts literally bigger than their heads with rear ends to match, and plenty of the screen real estate is dedicated to their respective jiggles and sashays. But at least these characters are powerful women, with agency and a penchant for destroying rooms full of bad guys.

It sounds pithy, but it does make a difference… the key point, though, is that this feeling of power and agency is a mitigating factor on their inexcusably problematic designs, not excusing them.

The sexualization of the playable women extends past their mere design to how they actually act in game, as well. Consider, for example, the Sorceress’s walking animation:

Her running animation, which I couldn’t find, is exceedingly worse, by the way. So like, that’s a thing.

However, I think the Sorceress is actually the most basic, entry-level representation problem of the three women playables? She’s a sexy lady with enormo-galactic destroyer boobs, which is disgustingly common in Japanese pop culture. Comparatively I see little discussion of the Elf, and her 90% leg body and disturbingly infantilized presentation, which I think is much more insidiously worrying.

And then there’s the Amazon (I had to struggle not to type out my long-standing nickname for her, the “Assazon”), perhaps the weirdest and most complex of them all. In a way, I dearly love the Amazon: she has tremendous physical speed and power, and in many ways the almost grotesquely exaggerated form of her muscular body is not the typical anime pinup we normally see, which even “big” and powerful women in Japanese pop cultural products usually are. We almost never see women-coded characters as the berserker, the bloodthirsty rampager, but that’s what she is (in comparison to her male counterpart, the inverted armored triangle that is the Fighter).

Which is kind of the problem for me, with her hypersexualization, which includes everything from her basically nonexistent outfit to her almost always-visible ass to her unarmed attack where she literally lands on someone ass-first (entirely inconsistent with the rest of her unarmed moveset, a bevy of acrobatic kicks that would make Chun-Li proud). To me, there was this tremendous opportunity for gender play with the Amazon that was simply ignored in favor of making sure that we knew she was ~*a lady*~.

“So why the thread necro on a nearly 2 year old game, Todd?” you ask. Well, let me wrap up and touch on that.

I have played Dragon’s Crown‘s single-player campaign from top to bottom with the Amazon, the Sorceress, and the Elf. By comparison, I have barely touched any of the male characters… nor is it likely that I ever will. They don’t appeal to me at all; even the Wizard, who is perhaps the only character close to my favored playstyle in fantasy RPG-style games (I enjoy playing spellcasters and “magic swordsperson” types). The Wizard certainly has the only body type I’d be even remotely interested in seeing; the Fighter’s unsettling V-shape and the Dwarf’s weirdly compact and over-muscled body are just not a thing I’m into.

But considering what I was saying last week about inhabiting fat and/or women avatars and their bodies, it was a weird realization to look at these three women, with their absurdly over the top sexualization and harmful representation of women, and go: “But those are the bodies I feel safe inhabiting while I play.” Because that’s the truth! I don’t feel “right” in the Fighter’s body, or the Dwarf’s, or even the Wizard’s (though he comes closest). Together they embody so many problems with masculine bodies that I don’t like, that feel uncomfortable or unsettling to me, that I pretty much reject them.

I’m not sure how to process this right now, to be honest; lately I’ve been having weird thoughts about gendered bodies and the virtual bodies that I feel comfortable “inhabiting” through play as avatars. In a way, it worries me that the gaming bodies I often feel most comfortable in are exaggerated and sexual stereotypes of women, because I don’t identify as a woman, or as having a woman’s body, and that puts me in the uncomfortable position of arguing for characters that I enjoy even while recognizing their potential harm to others. To put it another way: can I only enjoy these characters because for me as a cis man, the rhetorical stakes are so low?

Would I be comfortable if a straight person said “Well, I know this gay guy character is an awful femme media stereotype, but that’s the only character I feel okay playing”? I don’t really know the answer to that (especially since as I grow older I’m forced to confront my own internalized femmephobia regarding gay male presentation that reigned in my 20s).

And of course, I feel strange making deep commentary about women’s bodies at all in this manner, because I’m not one. So I encourage you, if you read this, to share your thoughts with me on the topic either in the comments or on Twitter. I’d like to be able to work it out, because I think these issues are complicated.

As I’ve often said before (and as have many others), the problem with sexualization in games is rarely the sexualized content itself, but that there is little alternative to it for us to engage with. I’d like to think that if the Amazon from Dragon’s Crown looked like Velma from Scooby Doo I’d still play and love it (I am pretty sure I would; get on that DLC, Vanillaware), but does that excuse my complicated relationship with her body as it is now? I can’t really say.