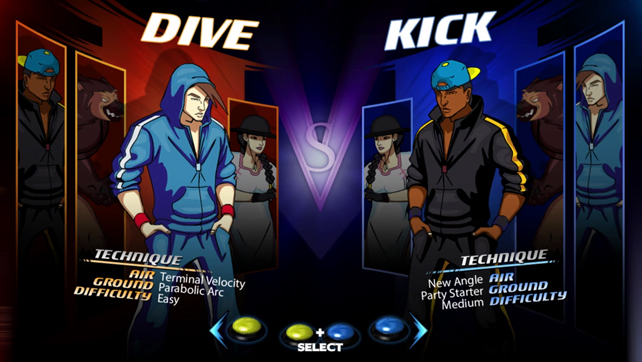 So last night I  mostly spectated a discussion on Twitter about the game Divekick. This may or may not have been caused by statements I made earlier that day suggesting that Noah Sasso’s BaraBariBall was, perhaps, a bigger success at taking a core fighting game idea and turning it into something broadly accessible by simplifying it.

The resulting conversation… well, you can start at this tweet and read your way down (and down, and down, and down) if you’re interested in how it went. I tried to keep my contributions to a minimum. Why? Because I could kind of tell up front that having a 140-characters-at-a-time asynchronous argument with Divekick‘s creator/director was going to head off the rails fast and, with all apologies to the brave soul that is Joel if he’s reading this, it kinda did.

I decided today that I wanted to get my thoughts out there in blog form, not to protect myself from argument, but so that I could maybe try to articulate what I felt in greater than 140 character chunks. If you’re interested in what I think on the matter, then feel free to check after the break:

So let me get this out of the way: I haven’t played Divekick. I cannot in any way talk about its quality, playability, or anything else related to actually engaging it as a game, other than an understanding of core mechanics that I’ve seen through watching it played/reading up on the game. I want to follow that up with saying, however, that I don’t think the game-qua-game (with all apologies to Forum 3000) what I was trying to address on Twitter with the comparison to Bara Bari Ball (which I have played, if only briefly, when Noah demo’ed it at No Show in 2012).

I really have no interest in Divekick, to be honest. While I’m not a competitive player, I’ve played fighting games since I (and they) were very young, so one of the core appeals of the game — the reduction in complexity of inputs — didn’t appeal to me. I was okay grappling with more complex systems. More to the point, the game’s fiction — characters in particular — represents a laundry list of parody elements that I just don’t care about, and/or find annoying. Seth Killian as the last boss is a clever little twist, especially given Street Fighter 4, but something about “Stream Monster” gets on my last good nerve especially given the role stream watchers had in, say, what happened on Cross Assault. The dig at Marn in Mr. N’s “I’m gonna be a millionaire in e-sports!” win quote just made me want to throw up my hands and walk away.

Maybe it’s because I’ve got such a mixed reaction to a lot of FGC tropes, but to me Divekick comes across as a love letter to the FGC, a game that is basically a distillation of everything the FGC thinks is important — stylistically, mechanically, culturally even — into a game that is relatively simple to control but not, as Heart mentioned in that Twitter thread I linked earlier, not particularly simple to “win at.” And a lot of that FGC stuff is just stuff I don’t like, or don’t want, and it’s not in any way limited to FGC-ish games either: I once complained to Ramiro Corbetta that I didn’t like how the win screen quotes in Hokra (a fellow Sportsfriends title to BBB) echoed competitive sports culture at its worst, as to me they sound a bit mean-spirited and taunt-y (and my hatred of taunt mechanics in games is well documented). And “love letter to the FGC” is fine, if that’s what you want to make. Skullgirls is not in precisely the same boat, but it’s got similar roots: a known FGC name wanted to design a game that was, in some way, a response to something in fighting games culture, though in Skullgirls‘s case it was more about addressing a lack or correcting an imbalance.

Now, the comparison I drew is to BaraBariBall which, if you’ve never played it, is basically a mashup of sportsball and Smash Bros. with a pretty retro visual aesthetic:

The point I wanted to make, on Twitter, is that it feels like Divekick and BBB are trying some very similar things: they’re built on a simple core mechanic with its roots in the fighting game genre, with a lot of the complex systems that have been the hallmark of that genre over the past 25 years plus removed. And they’re also deceptive about their simplicity; both games present control schemes that aren’t too complex but which support a reasonable amount of depth, more than the first glance suggests.

But between the two games, I feel like Divekick pushes me away and BBB invites me in. To put this in perspective, Divekick promo’ed at PAX East 2013 and it got a lot of attention; when I first encountered BBB it was at No Show conference, a game dev conference that I would venture to say takes great satisfaction in not being for or catering to the “prototypical” PAX crowd. I think you could — and that Noah has — sold BBB to that PAX crowd, but I’m not certain that Divekick would have found as much play at No Show the way that BBB did. Does that distinction make sense? There’s an aura of insider-ness, of cultural literacy, that surrounds Divekick that I just don’t feel from BBB. And so to me, I think BaraBariBall ends up ahead on that axis.

Now, I shied away from discussing a game with its creator using Twitter, the official Medium of Misunderstandings™, as my vector. I certainly don’t think that the spectre of that conversation — that I think Divekick is somehow unqualified awful and BBB is unqualified good — is how I feel, either. But I stand by my statement that Divekick‘s being so steeped in the cultural norms of the fighting game culture puts it in a particular context that might not always be working to its advantage.

There are probably other concerns  I have about that entire Twitter convo, but these are probably the only rational, non-drama bomb reasons. I’m interested to hear what people think about context and packaging with these two games. BBB has its own stuff, there: being part of “Sportsfriends” puts BBB in a very particular context too, one with its own history and set of baggage. But is that baggage going to weigh it down significantly? I don’t really know. All I do know is that these two games are a pretty interesting example of how cultural legacies and genre conventions can have a serious impact on how a game is perceived and where people think it “belongs.”

2 thoughts on “Taking a Dive”