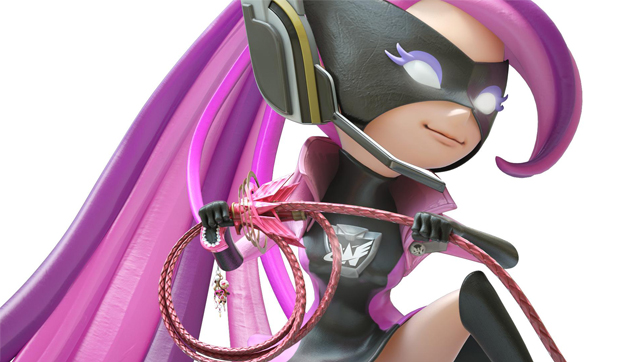 This morning I asked on Twit-ar if people would be interested in hearing some discussion on The Wonderful 101‘s “Wonder Pink” character, which I knew comparatively little about until Anita Sarkeesian of Feminist Frequency fame who mentioned it last night on Twitter:

I was interested in #Wonderful101 until I saw the Wonder-Pink trailer. She exemplifies everything NOT to do when creating female characters.

She then linked to the “intro” video for the character that gives her background, personality, weapon, etc. Take a look:

I watched it and then I pressed my fingers into my forehead and I let out a sigh and said “Oh, Platinum. Come on, guys.” Now, those of you who know me and/or my writing and/or have ever ever ever listened to Gayme Bar know that I love me some Bayonetta. And considering that both are Platinum Games characters with serious sexuality and gender representation issues (I love Bayonetta but that doesn’t stop me from noting problematic aspects) this might sound a little hypocritical, right? “Dude Wonder Pink bugs you but Bayonetta gets a pass?! WTF!”

That’s not an entirely unreasonable conclusion, but if I may, I think the scenarios are pretty different. Check after the cut to find out why:

Right so I’ve written about Bayonetta before, specifically a general look at the game/character and a comparison of her to Lollipop Chainsaw‘s Juliet Starling. If you haven’t read those posts, I recommend doing so, especially the part of that first one where I call Leigh Alexander’s writeup on the game “apologia” and that she was “[inventing] a reason that the game wasn’t awful on the subject of representation of women, and latched on to the ‘strong female character not afraid of her sexuality’ angle.” I wish I could link to Leigh’s writeup but it was sadly tied to the now-gone Gamepro. Suffice it to say since February 2010 I’ve gone through a lot of changes and rethinking on how I view gender stuff in games, thanks to exposure to a lot of great and smart writers on the subject (like, uh… Leigh Alexander).

Summary: I want you to read the part where I was wrong and kind of a jerk about it so that perhaps my points made today will have more impact. That bit comparing Juliet and Bayo is, I think, much more in line with my current feelings on the character.

Right. So, Bayonetta vs. Wonder Pink. What do they have in common?

That’s a pretty short list, but considering what we know of Wonder Pink the character so far, that’s all there is to know about her.

Alright. So between the video and that breakdown I feel like there’s a reasonable picture of our known info on Wonder Pink. So why am I confident in saying that I’m okay with Bayonetta but not with Wonder Pink?

For starters, I think there’s the issue beyond sexualized designs: their behavior. Much like I said with Juliet from Lollipop Chainsaw, the difference seems to be that Wonder Pink is (more) complicit in the gendered systems she’s part of than Bayo is. Bayonetta as a character has a strong level of ownership about herself; she is always in control of the situation, always the one setting the tone and the pace. She inverts tropes as well as uses or embodies them, like a drag queen… with all the attendant peril and promise. You can’t engage in drag without in some ways propping up rather than questioning the gendered systems that it also parodies. It’s a give and take.

Wonder Pink is almost entirely give, by comparison. At the most basic layer she’s a Sentai show stereotype: “[team name] Pink” is almost universally a girl in the super sentai universe because Pink Equals Ladies™ — by comparison “the other girl” is usually but not always “[teamname] Yellow” and, correct me if I’m wrong, super sentai fans, but Yellow is usually “less girly”/more of a tomboy than Pink, who embodies a more “pure” girlishness (please note my liberal use of Quotes of Dubiousness here). The Pink ranger is often associated with plants, flowers, or wind as an element; with monster-combiner robots theirs usually flies in some way.

The quality of this video is abysmal but it’s the best one I could find that shows all the Pink Rangers transforming (the US versions):

So right off the bat, Wonder Pink is situated squarely in this trope-laden stereotype role.

Now, let’s look at the various ways the video describes her:

Ayeah. Then there’s the fact that when we first see her on screen we get a focus shot on her ass, then her breasts. She flips out and assaults a fellow team member who (admittedly, somewhat creepily) suggests she smells as “fresh as a new-plucked rose.” And of course there’s that GREAT bit about “the party, and then the after party.” Don’t even get me started on the voice; I love Tara Strong to death but I dunno what sort of fucked up, out-of-nowhere, Linka-from-Captain-Planet fictional Eastern Bloc this character is supposedly from (Transylvania? That’s a region, not a country! So she’s Romanian?).

However, throw all of these tropes together, and then compare them to her teammates, and Wonder Pink stands out as just another “token” girl there for us to laugh at. That’s the real issue, to me. I can imagine a sexy, party girl, Romanian, pink-wearing sentai hero who is in no way this bundle of annoying Japanese and Western pop culture tropes. And when those tropes are used, they’re unironic, direct lifts from what we “already know” culturally. This isn’t to say that characters like Bayonetta aren’t doing the same in some way; she totally is. But she also subverts, twists, and plays with those tropes. Meanwhile Wonder Pink is just Every Pink Ranger Ever/Every Tsundere Dominatrix Ever and can I just say, that’s the second time I’ve used “tsundere” (3) in this blog post and I feel absolutely dirty doing so. She’s constructed as an emotionally unstable, socially-obsessed (to the detriment of her job performance: she’s late because afterparty), ogle-ready Token Girl Character. Sexy pose! Disco lights!

There are other angles here, too. The construction of Nintendo as a company with a younger target demo makes the tits-and-ass read of Wonder Pink’s intro even more unsettling, even if that construction is steadily eroding (they’re doing Bayonetta 2, after all). There’s the ethnicity angle; you’ll notice the two Wonderful Ones from the US, Red and Blue, are totally accentless, while the continually fat-shamed Wonderful Green has the worst French stereotype accent I’ve heard in some time now; listening to that actor and Tara Strong perform as Green and Pink takes me painfully back to Dragon Quest IV‘s localization on the DS, where the transliterator gave everyone ridiculous, Beyond the Valley of Pidgin English accents that bordered on being — or just WERE — racist.

It’s easy to say things are “camp” or “parody” or “satire” and thus explain away their problematic (re-)use of tropes and stereotypes. I will admit it’s a perilous line to walk, even for games like Bayonetta that I love. But at the risk of sounding unscientific, I feel like when you play a game or watch a movie or read a book that walks that line, part of you can read context clues and your own personal experience and tell  when it’s being done wrong. It took time for me to come around on Bayonetta, for example. If I want to be really unscientific, I don’t feel any joy in Wonder Pink’s sexuality. She’s a paint-by-numbers trope example, and so everything she does is exactly what you expect. Bayonetta, meanwhile, retained the ability to surprise me, to go “Haha wow, that was FUN TO DO.”

Perhaps more importantly I think that the context Bayonetta exists in allows for more interpretation and nuance than Wonder Pink. Maybe because I’ve played all of one game and seen only videos of another. It may be that in the end there are opportunities for Wonder Pink to play with representation, to subvert and tease and poke at her trope-ness. I’ll probably soften on her if that ends up being the case.

But in the current reckoning, she’s just a caricature. So is Bayonetta, but the latter’s case offers so many playful opportunities to subvert or even revel in it with a healthy dose of campy, pointless excess. In the end, I think that makes her more satisfying and interesting despite her hypersexualized appearance.