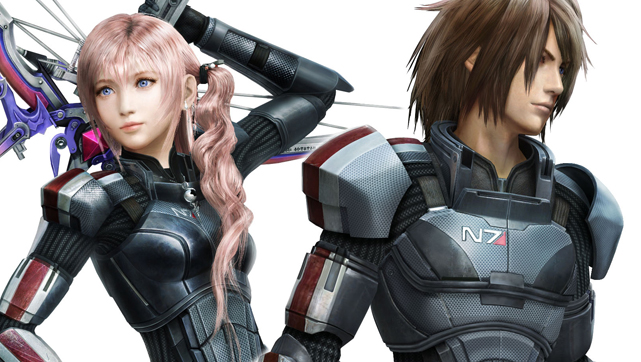 Alright I promised I’d leave this alone but someone made a really great comment on that last post and I’m somewhat afraid that it might not get read. Plus it’s actually a somewhat different line of thinking from the “FF is dead (to me and only me)” line of thinking. Plus it’s a reason for me to talk about Final Fantasy X-2 so you know, there’s that.

So if you don’t know much about the game let me set some important context for you. It has a “job”-swapping system, inspired by FF3/FF5, only unlike those games you can swap jobs (for those who REALLY don’t know, “job” is a pre-transliteration term for “class” in the D&D sense in many JRPGs) in combat on the fly. So if you’re rocking out, healing your allies up as a White Mage and then suddenly the monster-sniping skills of a Gunner are needed, BAM, you can change that, slipping into a whole new set of abilities instantly.

But the deal is, in the game’s fiction, “jobs” come in the form of “dresspheres.” Now, FFX‘s universe involves things called “spheres” that are basically a combination of camera, audio recorder, and pseudo-telepathic thought recorder. They’re palm-sized balls of… whatever filled with a swirling blue-white substance. In FFX they were a minor setting detail, the stuff of sidequests. In FFX-2 they’re a major plot point: now that the big bad that occasionally wiped out society from FFX is gone, the people of Spira (where the games take place) are interested in learning more about their history, and so uncovering spheres of the past gave rise to a special type of mercenary, “Sphere Hunters” that brave dangerous areas to find and retrieve these spheres. The game kicks off when Rikku finds a sphere of someone who looks like Yuna’s lost love interest Tidus from FFX, and Yuna becomes a Sphere Hunter to try and find him.

Now, the rest of this — including the actual, you know, content of this post — is spoilery for FFX-2 which is heading for an HD re-release, so the rest is behind the cut:

Right, so. Dresspheres. The schtick of the job system in FFX-2 is that the Gullwings — Yuna, Rikku, new friend Paine, and some support characters nobody cares about — found a handful of spheres that contain the memories of people from the past that, when focused through something called a Garment Grid, lets them take on the skills and even some of the appearance of those people. So when Rikku busts out her Black Mage suit, she’s actually channeling the memories and skills of a Black Mage of yore. One of the first dresspheres you get is Songstress — it’s responsible for the pop concert shenanigans that make up the game’s opening sequence — and that sphere in particular houses the spirit of a woman named Lenne from the distant past, one who bears a striking resemblance to Yuna.

Long story short: Clothes are power. This is the core concept, to me, of FFX-2 (and it appears to be behind FF13:LR which is why I retain excitement in defiance of Lightbreastnado).

Now, when Yuna and Rikku went from FFX to FFX-2 they both got outfit redesigns:

As you can tell for yourself, Rikku (on the right) didn’t change much. What did change was for the skimpier, I grant you, in the sense that she went from a midriff-baring shirt with one sleeve missing to a bikini top with two sleeves made… out of bows? And her boots got shorter. Otherwise she is pretty much dressed just like she was. This is her outfit for her default dressphere, Thief, and Yuna and Paine’s versions are about the same.

Yuna on the other hand does, in fact, change a lot, and while I’ve come to be at peace with her outfit for Gunner (her default dress sphere; see also Rikku and Paine’s versions — I think Paine’s is sensible) I get that it is a pretty sexualized change. Short-shorts and a boob window with the logo of her favorite sports team(*) is a sharp difference from the reserved yukata she wore as a summoner, for sure. And then there’s her running animation… augh. The flouncy hands up side-to-side thing just feels weird for the newly acrobatic action movie heroine-y vision of Yuna. However the narrative thrust of FFX-2 is about Yuna deciding she needed a drastic change in her life, so I didn’t like the specific visual changes but I understood why it was so, so different from her FFX appearance/style.

(* — for reals. It’s the logo of the Zanarkand Abes, Tidus’s old blitzball team)

Which brings me to the comment that got left on yesterday’s post, from someone going by “Rutee”:

Also, speaking as a feminist, I sincerely wish Dudes would put down X-2′s alleged horrible sexism. Yes, it has fanservice to a degree not generally seen in the mainline series. It’s also a game explicitly about women doing what they want in the aftermath of saving the world (Except for Paine, who was chillin’ before this, one assumes). You can’t try to use feminist logic and then immediately claim afterwards that X-2 is about playing dress up (almost always on the list) – unless you said that when you played FFV, T, TA, TA2, MQ, III.. It’s the job system. Job systems have you change classes. Your class has a particular style of dress. None of this changed when they made all the characters women. What changed was that the fanservicey outfits were now in 3-D and actually well rendered, rather than strongly implied (Dancer is king here, in FFV).

I read that and went “Oh, YES.” This is very similar to a point that Ethan Gach made on Pixels or Death in regards to my first post on the FF-is-dead debate: we shouldn’t suddenly ignore that Final Fantasy has been sexualizing women without necessarily always empowering them since Maria’s ridiculous battle bikini back in FF2. I mean, since it came up in the comment, here’s the concept art for the Dancer job in FF5 for each character in the party:

Now imagine Lenne and Krile (2 and 5 in the order) rendered in FFX-2-level 3D art. So you know, there’s that.

Plus, can I just point out, that outfit everyone complains about is just one of like, 15 that the protagonists of FFX-2 can wear. And it’s true, some of them are equally sexualized (Lady Luck is the real culprit there, with the inexplicable and terrifying cut-out dresses). But a lot of them are pretty normal and not revealing at all, by RPG standards: check this link to see pictures of YRP in every job. Even the FFX-2 International new jobs are pretty reasonable, which is pretty surprising since Psychicker goes for that Japanese schoolgirl look which is usually the slippery slope to awful.

It’s almost as if claims of rampant, pervasive sexualization/”skimpiness” in the outfits is based entirely on two outfits that are in the promo art. It’s almost as if you have to play the game to see how those changes fit in narratively. For example, did you know that Rikku and the rest of the Al Bhed tribe live in a desert? How shocking that she’s in a bikini top! Why don’t we get her into a dowdy sweater.

Look: I don’t want to shut down criticism of FFX-2 and its art/char design on sexualization grounds. The game can and does often make choices in both areas that make me cringe. I joked about Rikku’s top right now but she was made “sexier.” Yuna was clearly hueshifted into a “sexy action heroine” outfit for her “default.” I think that’s reasonable. Hell, I know someone who can’t play the game because Yuna’s awful “girly girl run” trope running animation — and it is cringe-inducing, believe me — makes her want to scream. And that’s fine! But she also doesn’t roll up in my business shouting ALL THOSE SEXY GIRLS RUINED EVERYTHING FOR EVERYONE AND HAVE NEVER EVER DONE IT BEFORE.

I’ve said this a lot before, and I’ll admit right now as a cismale it’s not my sexualized imagined body up on the screen so I might be off-base here, but I don’t think that sexiness in and of itself is the problem. I think the actual problem is when sexiness is the only option, and when it intersects with problematic things like victimhood, or women considered as property… times when sexiness is “all there is” to a woman character. Sexiness exists inside a context and I think some contexts are more problematic than others. In FFX-2, Yuna, Rikku, and Paine aren’t victims, and are nobody’s property. They “play dress-up” but they do it to kick monster ass, in a way that makes them rock stars in the FFX world. So maybe I’m willing to forgive a little bit of sexiness in that instance compared to, say, Dead or Alive Beach Volleyball.

I mean, if you want to critique FFX-2 from a feminist POV, there’s meatier issues to handle, there. For example, the trio of Nooj, Baralai, and Gippal — the “male” counterparts to YRP spread across three different factions — and their relationship to the narrative, especially Paine’s personal narrative, is important. Yuna and co. spend a non-trivial portion of the story pingpong-ing between these three male characters, motivated more by their relationship to each’s faction than anything else, and I think that skirts some “the men are the real force driving the story” territory that displeases me. There’s also the game’s “good” and “best” endings compared to the “default” ending — in the “good” and “best” endings, Yuna gets Tidus back. Yet if you want to look at FFX-2 as a narrative about Yuna’s developing independence from her past and moving on as a person, the “default” ending where she has come to be at peace with losing Tidus is actually more satisfying. Of course, I have my own thoughts on that, but they’re not 100% germane to this already-rambling blog post which has veered sharply off the rails.

Summary: I find claims that FFX-2 is primarily about putting “cute girls in cute outfits” to be a uselessly surface read of the game that often says more about the person making the complaint than about the game itself. I also find the changing of outfits to be well integrated with the game’s thematic content, both narratively and as an expression of the idea that part of our understanding of a role/job/task is informed by its associated physical trappings, of which outfits/uniforms are perhaps the most prominent. I mean, that’s why Final Fantasy 3 and Final Fantasy 5 both include a unique, specific version of each job’s “uniform” for every party member. It’s why classes have unique armor sets in almost every MMO.

I guess it just didn’t matter until it intersected with pop music? Maybe that’s the real problem!

2 thoughts on “Dress for Success”