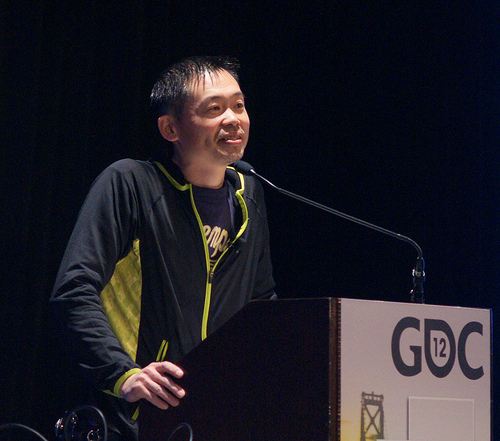 So, today I attended a talk at GDC given by former Capcom designer Keiji Inafune about the future of the Japanese game industry and what is going wrong with Japanese game creators. As you might know, I recently was a podcast guest of Silly Frags/Gayme Bar collaboration Gayme Probe where I defended the appeal of JRPGs (kinda sorta), and a reader of my twitter feed who saw I was in attendance asked me what I thought about the future of Japanese game development. My response spanned a few tweets and I feel like sharing it with all of you. Since I don’t get the blogging urge very often, I decided to run with the ball.

So here’s my deal. In his talk, Inafune talked about Japanese developers needing to have “the will to win.” He actually said the phrase “Katsu… zettai ni, katsu!” as a watchword, and a reasonable translation from the Japanese of that phrase is “I will absolutely win! For certain!” I think his argument that Japanese developers were able to, for a very long time, sit back on brand loyalty laurels without doing much innovating (what Inafune calls “the easy route”) is spot on. He talks about the difference between being able to take risks and taking the safe route, and that the lure of easy success steers people away from risks.

Well, here’s the thing. If you’re saying “But that applies to Western designers too!” then you’re right, absolutely, and Inafune didn’t get up there and say anything new. I wanted to ask him some deeper questions on the issue, but unfortuantely there wasn’t much time, translation made each question a lengthy process, and worst of all (please forgive my bluntness) almost all the questions that did get fielded to poor Inafune-san were lengthy, fanboy-ish, and absolutely stupid. Sorry, America, that’s the truth. Anyhow.

[Edit: I got my wires crossed and linked a piece Leigh Alexander wrote on Lemarchand that wasn’t about his game. That said, the piece she wrote is still awesome and says a lot about Richard’s design philosophy, so read it anyway.]

I think the answer to this question lies, really, in the winning game of the 2012 Game Design Challenge, “The Shame Game” by Richard Lemarchand. I won’t describe his game here in detail but I will mention that his choice of song, one made specifically for its latent qualities of inspiring joy and embracing silliness, was absolutely perfect. What he had us hum — and then sing — was a combination of low key “Nananan Katamari” which he then edited to segue immediately into the big brassy tones of “Katamari on the Rock”:

Now. Why do I think this is important? Because I feel like Katamari Damacy is a game that has done exactly what I feel like Japanese games need to do, which is this: find a way to appeal to a global audience, but do it with their own distinct cultural voice and feel. To me, that’s the long and the short of it. Certainly, Katamari Damacy isn’t the only series that does this. I would say that Platinum Games (and even back when they were Clover) are very adept at it, Bayonetta is another game I feel has appeal to a broad audience but which, when I play it, feels distinctly “Japanese” in execution. I tried to think of a game that is “the Western Bayonetta” and I got as far as Saints Row the Third, which is an acceptable but incomplete answer. They’re similar, but not the same. Saints Row is decidedly Western; Bayonetta just has enough anime-inspired, Japanese-inspired flavor to it that it’s entirely distinct.

Am I saying that Japanese games have to rely on the trope of “Oh, you wacky Japanese!” and just be crazy and “ethnic?” Of course not. That’s colonialist nonsense. But as much as I loved both Final Fantasy XIII and Final Fantasy XIII-2, I see in them the problematic desire to be “Western in execution.” Why? Wouldn’t it be better to push JRPGs as a genre forward in their own way? To do something distinct and wonderful that isn’t just “ANIME SKYRIM LOL”?

If Japanese developers want to survive, they do need to do the things Inafune says. Stop being complacent, stop relying on brands, branch out and take risks and be willing to fail. But I’m arguing that they need to develop their own style, their own unique flavor. One of the things I love about Japanese games is engaging with the culture. Certainly it’s why, despite their occasional flaws, I like Persona 3 and Persona 4. They’re this weird look into a slice of Japan (which Atlus mostly cleverly left intact… mostly). I have a copy of Street Fighter X Tekken in my hotel room, waiting to be played when I get home, and I am looking forward to its particularly Japanese execution: a sort of over-the-top, self-parodic love of the form that feels kinetic and fresh and enjoyably ridiculous.

I think Japanese developers need to embrace things rather than hone them away. If relying on brands is Inafune’s “taking the easy route,” then so is “Let’s just do things the Western way.” Find a voice that’s your own and let us have it. I guarantee that if you can do that, the culture that produced so many generations of beloved games — beloved games that the Western competitors you’re facing grew up on and loved and cherished — can be great again.